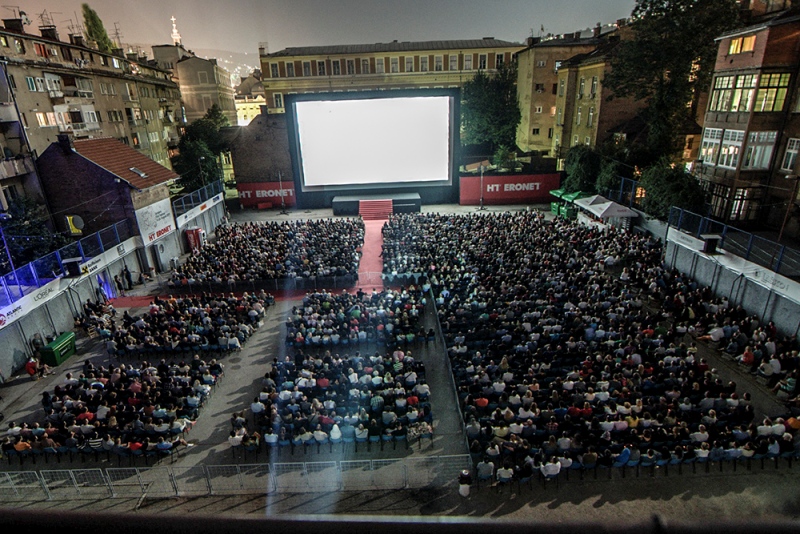 Since exploding onto the scene as the winner at the 2000 Cannes Film Festival, Alejandro Gonzales Innaritu’s AMORES PERROS has gone on to achieve universal acclaim and admiration from critics, cinemagoers and directors alike. The film was hailed as “the first classic film of the new decade“ and was nominated for Best Foreign Language Film at the 2001 Academy Awards.  Beginning with a kinetic, bone-crushing car accident, AMORES PERROS imaginatively interweaves the stories of its three victims: Octavio a young man who has fallen in love with his violent brother’s wife; Valeria, a beautiful Mexican model for whom physical appearances are everything; and El Chivo, a former political assassin now exiled from his family. The result is a moving, visceral eulogy to life, loss and dog fighting on Mexico’s mean streets.

Set in the 1920s on the opulent Riviera in the south of France, Woody Allen's MAGIC IN THE MOONLIGHT is a romantic comedy about a master magician trying to expose a psychic medium (Emma Stone) as a fake. What follows is a series of events that are magical in every sense of the word and send the characters reeling. In the end, the biggest trick MAGIC IN THE MOONLIGHT plays is the one that fools us all.

Northern China, 1999. The grisly discovery of several corpses is made in a small town. A bloody incident during an attempt to capture the alleged murderer leaves two police officers dead and another badly injured. The surviving officer Zhang Zili is suspended from duty; he takes a job as a security guard at a factory. Five years later, another series of mysterious murders occurs. Aided by a former colleague, Zhang decides to investigate under his own initiative. He discovers that all the victims were connected to Wu Zhizhen, a young woman who works at a dry cleaners. Pretending to be a customer, Zhang begins to observe her and finds himself falling in love with the reticent Wu Zhizhen. One cold winter’s day he makes a horrific discovery. His life now in danger, he realises it is not always possible to separate guilt from innocence.

Poland 1962. Anna is a beautiful eighteen-year-old woman, preparing to become a nun at the convent where she has lived since orphaned as a child. She learns she has a living relative she must visit before taking her vows, her mother’s sister Wanda. Together, the two women embark on a voyage of discovery of each other and their past. Her aunt, she learns, is not only a former hard-line Communist state prosecutor notorious for sentencing priests and others to death, but also a Jew. Anna learns that she too is Jewish - and that her real name is Ida. This revelation sets Anna, now Ida, on a journey to uncover her roots and confront the truth about her family. Ida has to choose between her birth identity and the religion that saved her from the massacres of the Nazi occupation of Poland. And Wanda must confront decisions she made during the War when she chose loyalty to the cause before family.

Norway, winter. Introverted and hard-working Nils drives the powerful snow plough that keeps open the roads and mountain passes of the inhospitable frozen landscape where he lives. He’s just been named citizen of the year for his efforts when he receives news that his son has died of a heroin overdose. Refusing to believe the official version of his son’s death, he begins a covert search for the boy’s alleged murderers. A surprising turn of events causes him to become a tough-as-nails and feared underworld hero – one whose identity nobody knows. A gruesome black comedy full of impressive images of an endless wintry-white landscape which Nils knows how to use to his advantage. The film deploys dark comedy to depict Nils’ exploits in the realm of gangsters, which is characterised by a delicately nuanced portrayal of the mentalities of Swedish, Norwegian and Serb mafiosi with Bruno Ganz putting in an appearance as a Serb mafia boss.

Grebo and his very pregnant wife Liliane are taking a well-deserved vacation at a popular Adriatic seaside resort. All inclusive! All the sun, swimming and fun that their hearts desire. What could possibly go wrong on such an idyllic holiday? At open-mike night, Grebo seduces the resort crowd and reminds his loving French wife of the Sarajevo rocker she fell in love with. But the evening’s big surpise is the young couple’s meeting with mysterious Flora. The charismatic young woman will soon put their young marriage to the test. Past secrets cannot stay hidden for long on Love Island.

THE RAILWAY MAN is an inspiring true story of heroism, humanity and the redeeming power of love. Based on a remarkable autobiography, the film tells the extraordinary and epic true story of Eric Lomax, a British Army officer who is tormented as a prisoner of war at a Japanese labour camp during World War II. His experiences left him traumatized and shut off from the world. Years later, he met Patti, a beautiful woman, on a train and fell in love. Patti was determined to rid Eric of his demons. Discovering that the young Japanese officer who haunted her husband was still alive, she faced a terrible decision. Should Eric be given a chance to confront his tormentor? Would she stand by him, whatever he did?

The Second Chechen War, 1999. After his parents are killed in their village, a small boy flees, joining the flood of refugees. He meets Carole, a European Union delegation head and little by little, with her help, he will return to life. At the same time, his elder sister Raissa searches tirelessly for him amongst the civilian exodus.Then there’s 20-year-old Kolia... A recent Russian Army recruit, he will gradually be overwhelmed by the daily life of wartime. THE SEARCH recounts, on a human scale, a powerful story of conflict told through four lives that will be brought together by a shocking twist of fate.

A demolition engineer, a cook and a waitress in a godforsaken roadside diner, a nonchalant businessman in a hostile country, a pair of newlyweds at a posh wedding, and a millionaire enjoying amicable relations with both his family and his employees … Meet the protagonists of six stories by writer and director Damián Szifrón, normal people with lives just like ours. But only until an ordinary situation – the kind of slight injustice that millions of people the world over have to face on a daily basis – yanks the conformist mask of normality from their faces. Nerves become frayed and boundaries of decent behaviour are overstepped with the speed of a rabid animal. Co-produced by the Almodóvar brothers and an audience favourite at this year’s Cannes festival, this black comedy compilation describes six kinds of revenge, along with resolutions that arguably defy all reason.

A NIGHT AT THE CINEMA IN 1914
United Kingdom, USA, 2014, Colour and b&w, 85 min.
A compilation of shorts from the BFI National Archive
With music by Stephen Horne

Cinema a century ago was a new, exciting and highly democratic form of entertainment. Picture houses nationwide offered a sociable, lively environment in which to relax and escape from the daily grind. With feature films still rare, the programme was an entertaining, ever-changing roster of short items with live musical accompaniment. 100 years on, this special compilation from the BFI National Archive recreates the glorious miscellany of comedies, dramas, travelogues and newsreels which would have constituted a typical night out in 1914. Our selection includes a comic short about a face-pulling competition, a sensational episode of THE PERILS OF PAULINE, scenes of Allied troops celebrating Christmas at the Front, and an early sighting of one of cinema’s greatest icons…