The 26th Sarajevo Film Festival presents this year’s series of Masterclasses. As always, they feature some of the most renowned filmmakers from all over the world. This year, the festival public will be able to watch them online, via ondemand.sff.ba. 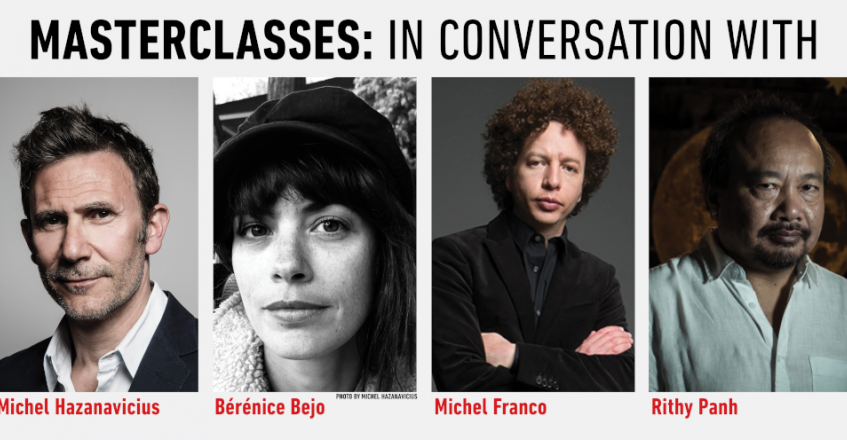 The Masterclasses include conversations with director Michel Hazanavicius, actress Bérénice Bejo, director Michel Franco and director Rithy Panh.
Sarajevo Film Festival Masterclass Programme is organised in cooperation with Variety and will be available worldwide via the Variety Streaming Room.
MASTERCLASS with Michel Hazanavicius
Michel Hazanavicius was born in Paris in 1967. He attended art school then moved on to work as a director of commercials and television projects. After his first short film, ÉCHEC AU CAPITAL, and several script collaborations, he shot his first feature-length film, MES AMIS, in 1999. In 2006, he directed his second feature, OSS 117: CAIRO, NEST OF SPIES, then, three years later, OSS 17: LOST IN RIO. In 2011, he made THE ARTIST, a silent, black-and-white film starring Bérénice Bejo and Jean Dujardin, which won five Academy Awareds in 2012, including Best Film, Best Director and Best Actor for Dujardin, while Bejo was an Oscar nominee for Best Supporting Actress. THE ARTIST also received three Golden Globe Awards, seven BAFTAs, the Best Actor Award (for Dujardin) on its premiere at the Festival de Cannes in 2011, among many other awards. His films THE PLAYERS and REDOUBTABLE were also selected for competition at Cannes.
MASTERCLASS with Bérénice Bejo
Bérénice Bejo is one of the leading French actresses working today. She had her international breakthrough in 2011 as the lead in the Academy Award winner THE ARTIST, directed by  Michel Hazanavicius. For this role she was awarded the César as best actress, also she received recognition for film prizes worldwide, a nomination for a BAFTA award as best actress as well as nominations for a Golden Globe award as well as an Oscar as best actress in a supporting role. For Michel Hazanavicius she also acted in his follow up, THE SEARCH, which premiered in the Cannes competition in 2014 and then GODARD MON AMOUR which premiered in the Cannes competition in 2017. Before that Bérénice Bejo had first acted for the director in 2006 in OSS 117 : CAIRO, NEST OF SPIES. Another big triumph in her acting career was Asghar Farhadi’s Cannes-smash THE PAST, for which she won a Palme as best actress. Born in Argentina, Bejo came to France at the age of three. Her father, the director Miguel Bejo, and her mother, lawyer, introduced her to the movies, and she started her career in 1998 with LES SOEURS HAMLET by Abdelkrim Bahlo. In 2000 Gérard Jugnot offered her the first lead in MOST PROMISING YOUNG ACTRESS. After that she acted in the US production A KNIGHT’S TALE alongside Heath Ledger. Upon her return to France Bejo worked with directors like Laurent Bouhnik and Marie-France Pisier. Further recent roles encompass films like Eric Barbier’s THE LAST DIAMOND, Brady Corbet’s THE CHILDHOOD OF A LEADER, Joachim Lafosse’s AFTER LOVE, Tran-Anh Hung’s ETERNITY, Marco Bellocchio’s SWEET DREAMS, Ken Scott’s THE EXTRAORDINARY JOURNEY OF THE FAKIR, Pablo Trapero’s LA QUIETUD and Fred Cavayé’s THE GAME. She just finished shooting Tom Shoval’s SHAKE YOUR CARES AWAY and Sergio Castellitto’s UN DRAGO A FORMA DI NUVOLA.
MASTERCLASS with Michel Franco
Michel Franco was born in Mexico City in 1979. He began making short films after completing his media studies. In 2001, his short film CUANDO SEA GRANDE, produced for an anti-corruption campaign, was screened in 50 cinemas throughout Mexico. Two years later, with ENTRE DOS, he won the Grand Prize of the Huesca Film Festival and the Best Short Film Award of the Dresden Film Festival. His debut feature, DANIEL AND ANA, was selected for the Un Certain Regard section of the Festival de Cannes and was later screened in numerous other festivals and released in cinemas around the world. He has won critical acclaim for the films he has written, directed and produced, among them AFTER LUCIA, which won the award for Best Film in Un Certain Regard in 2012, and CHRONIC, which took the Best Screenplay award at Cannes in 2015. Franco produced Gabriel Ripstein’s 600 MILES, winner of the Best First Feature award at the Berlin International Film Festival in 2015, and Lorenzo Vigas’s FROM AFAR, which took the Golden Lion at the Venice Film Festival in 2015. His latest film, APRIL’S DAUGHTER, was selected for Un Certain Regard in 2017, where it won the Jury Prize. Through his company Lucia Films, Franco is currently developing several feature-length films and television projects.
MASTERCLASS with Rithy Panh
Rithy Panh was born in 1964 in Phnom Penh, Cambodia. He fled the Khmer Rouge dictatorship and came to Paris in 1980 where he studied at the Institut des Hautes Études Cinématographiques (now la Fémis). His 2003 documentary S21: THE KHMER ROUGE KILLING MACHINE addressed the Khmer Rouge’s policy of systematic extermination between 1975 and 1979. He is co-founder of the Centre Bophana, which is dedicated to archiving Cambodian film heritage. His 2013 documentary film THE MISSING PICTURE was screened in the Un Certain Regard section at the 2013 Cannes Film Festival, where it won the top prize.
In cinemas in BiH in 2022, 1,118,550 viewers
„May Labour Day“ by Pjer Žalica available online from January 1st
Docu Rough Cut Boutique 2023 opens call for entries!
NETWORK OF FESTIVALS IN THE ADRIATIC REGION PRESENTS: Winter Edition
MAY LABOUR DAY by Pjer Žalica closed the 28th Sarajevo Film Festival