The series of talks in the Masterclasses Programme of the 28th Sarajevo Film Festival will present some of the most famous film artists. 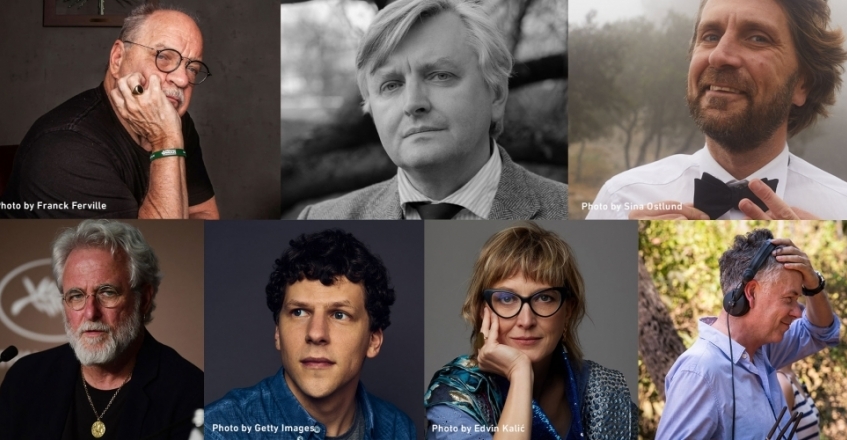 Paul Joseph Schrader was born in 1946. He earned his B.A. from Calvin College, and M.A. from UCLA Film School while working as a film critic and writing Transcendental Style in Film. He subsequently attended the inaugural class at AFI. He has written and directed over thirty films, including four collaborations with Martin Scorsese - the first of which, TAXI DRIVER, won the Palme d'Or at the 1976 Cannes Film Festival. In 1978, he directed his first film, BLUE COLLAR, based on a screenplay he co-wrote with his brother. Later the same year, Schrader wrote and directed HARDCORE followed by AMERICAN GIGOLO, CAT PEOPLE, MISHIMA, and AFFLICTION.
In 2019, Schrader was nominated for an Academy Award for Best Original Screenplay for FIRST REFORMED, which he also directed. THE CARD COUNTER, which he most recently wrote and directed, premiered at the Venice International Film Festival in 2021 and garnered numerous awards and accolades.

Sergei Loznitsa was born in 1964. He grew up in Kyiv (Ukraine), and graduated from the Kyiv Polytechnic in 1987 with a degree in Applied Mathematics. Between 1987 and 1991 he worked as a scientist at the Kiev Institute of Cybernetics, specializing in artificial intelligence research. In 1997, Loznitsa graduated from the Russian State Institute of Cinematography (VGIK) in Moscow, where he studied filmmaking.
Sergei Loznitsa has been making films since 1996, and has by now directed 25 award-winning documentaries and four fiction films.
Loznitsa’s feature debut MY JOY (2010) premiered in the main competition at the Festival de Cannes, followed by his next feature film IN THE FOG (2012), which was awarded the FIPRESCI prize at the 65th Festival de Cannes. In 2017, Sergei Loznitsa presented his third feature A GENTLE CREATURE, also in competition at the Festival de Cannes. In 2018, Loznitsa received the Best Director award of the Un Certain Regard section at the Festival de Cannes for his fourth feature film, DONBASS.
In 2013 Sergei Loznitsa founded film production company ATOMS & VOID.
Sergei Loznitsa’s feature-length documentary MAIDAN (2014) - which chronicles the Ukrainian revolution - had its world premiere as a Séance Special at the Festival de Cannes. His subsequent feature length documentaries, THE EVENT (2015), AUSTERLITZ (2016), THE TRIAL (2018) and STATE FUNERAL (2019) were presented as Special Screenings at the Venice Film Festival. In 2021 Sergei received a Special Jury Prize, L’Oeil D’Or Award, in Cannes for his film BABI YAR. CONTEXT. Loznitsa’s most recent film, THE NATURAL HISTORY OF DESTRUCTION, premiered as a Special Screening at the 75th Festival de Cannes in 2022.
Sergei Loznitsa continues to work both in documentary and feature genres.

Ari Folman is an Israeli director, screenwriter, and film score composer. He has written for several successful Israeli television series, including the award-winning IN THERAPY, which was the basis for the HBO series IN TREATMENT. He is the director of the Academy Award-nominated WALTZ WITH BASHIR and THE CONGRESS.

Jesse Adam Eisenberg was born on October 5, 1983, in Queens, New York. He attended the New School University, New York, where he was a liberal arts major, with a focus on Democracy and Cultural Pluralism. He also studied at The New School in New York City's Greenwich Village.
Eisenberg’s film credits include ROGER DODGER, THE SQUID AND THE WHALE, ADVENTURELAND, ZOMBIELAND, THE SOCIAL NETWORK, NOW YOU SEE ME, THE DOUBLE, NIGHT MOVES, THE END OF TOUR, AMERICAN ULTRA, LOUDER THAN BOMBS, BATMAN V. SUPERMAN, NOW YOU SEE ME 2, CAFÉ SOCIETY, JUSTICE LEAGUE, THE HUMMINGBIRD PROJECT, THE ART OF SELF DEFENSE, ZOMBIELAND: DOUBLE TAP, RESISTANCE, VIVARIUM and WILD INDIAN.
Upcoming, Eisenberg will play the titular character of ‘Toby Fleishman’ in the FX limited series FLEISHMAN IS IN TROUBLE based on Taffy Brodesser-Akner’s best-selling novel of the same name.
Eisenberg has written four plays, including “The Spoils,” which had a box-office record-breaking run on West End.  He also wrote and starred alongside Vanessa Redgrave in his play “The Revisionist,” and “Asuncion.” His play, “Happy Talk” starring Susan Sarandon and Marin Ireland opened April 2019 at the Signature Theater in New York.
Eisenberg is a frequent contributor to The New Yorker, the author of the collection, “Bream Gives Me Hiccups” from Grove Press and the Audible Original “When You Finish Saving the World”, which won “Best Original Work” at the 2021 Audie Awards.
Eisenberg’s directorial debut and an A24 title, WHEN YOU FINISH SAVING THE WORLD premiered at the 2022 Sundance Film Festival to glowing reviews and screened as a part of Critics Week at the 2022 Cannes Film Festival. The film follows Evelyn (Julianne Moore) a woman devoted to helping people fallen on hard times, but who struggles to connect with her son Ziggy (Finn Wolfhard), an aspiring internet star oblivious to the problems of the world. This emotional comedy- based on the Audible Original of the same name, also written by Eisenberg- reveals a funny and sharply perceptive portrait of a mother and son who may seem at odds but who are more alike than either would care to admit.

Born  in  Sarajevo  on  December  19th  1974,  Jasmila  Zbanić graduated  from  the  Academy  of  Performing Arts in Sarajevo, Department for theater and film directing. Before filmmaking, she worked as a puppeteer in Vermont-based Bread and Puppet theater and as a clown in a Lee Delong workshop. In 1997, together with her friends, she founded Artist’s Association Deblokada through which she produced, wrote and directed many documentaries, video-art works and shorts. Among them is feature film GRBAVICA, awarded with Golden Bear on Berlinale 2006. Her latest film QUO VADIS, AIDA? premiered at Venice Film Festival, and besides multiple other awards, this movie received European Film Award for best movie, director and main actress, as well as nominations for USA Academy Awards, Oscar® in the category Best International Feature Film, and two BAFTA Awards.