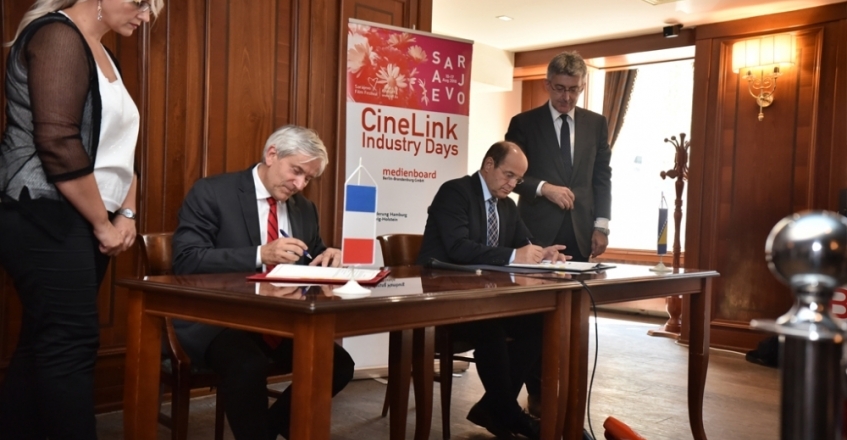 "French public support for cinema has served as an example for many countries. Like France, Bosnia and Herzegovina share a belief in the importance of cinema for the cultural and economic growth of the country," said Adil Osmanović, Minister of Civil Affairs of Bosnia and Herzegovina, after signing the new co-production agreement between France and Bosnia and Herzegovina that will replace the existing treaty signed by France and Yugoslavia in 1975. "Our intention is to increase co-operation between Bosnia and Herzegovina and France in the area of filmmaking, in order to expand the filmmaking possibilities for film professionals from both countries and to enable better access to the French market by BH. films, and for French films in the BH. market", explained Mr. Osmanović.
According to the new co-production agreement, in order for a film to be considered a co-production, the share of participation of the partner country is decreased to 10%, opposed to the previous 30%. Furthermore, films co-produced by Bosnia and Herzegovina and France will be treated as a national films in both countries, meaning that co-produced films have access to the additional aid and funding possibilities reserved for national films.
Guillaume Rousson, Ambassador of France in Bosnia and Herzegovina, added that this agreement will contribute to the development of the cultural co-operation between the two countries on a general level. "France has always served as a strong presence in the culture of Bosnia and Herzegovina, helping and initiating many events that still take place today. I am very happy to say that this agreement presents a new step in the collaboration between our two countries".
"I am especially glad that the co-production agreement was signed during the Sarajevo Film Festival, as this highlights the importance of the film sector and emphasises Sarajevo as a city of film," stated Mr Osmanović. Just prior to the signature, Mr Osmanović opened a panel presentation, part of the CineLink Talks programme, in which Andrew Barnes, Associate Director of Olsberg SPI, presented the impact that the Sarajevo Film Festival has on the economy, tourism, social and cultural life of the City of Sarajevo, as well as of Bosnia and Herzegovina. Khaldun Sinno, Deputy Head of the Delegation of the European Union to Bosnia and Herzegovina, and Emmanuel Mouriez, Director of Institute Francais in Bosnia and Herzegovina, also took part in the panel.
Jovan Marjanović, Head of CineLink Industry Days, who moderated the discussion, concluded that the value of these kind of studies for a variety of players, in both public and private sectors, is that it makes for better informed decisions. "We are going to follow up in gathering data and evaluating on a regular basis."
In cinemas in BiH in 2022, 1,118,550 viewers
„May Labour Day“ by Pjer Žalica available online from January 1st
Docu Rough Cut Boutique 2023 opens call for entries!
NETWORK OF FESTIVALS IN THE ADRIATIC REGION PRESENTS: Winter Edition
MAY LABOUR DAY by Pjer Žalica closed the 28th Sarajevo Film Festival