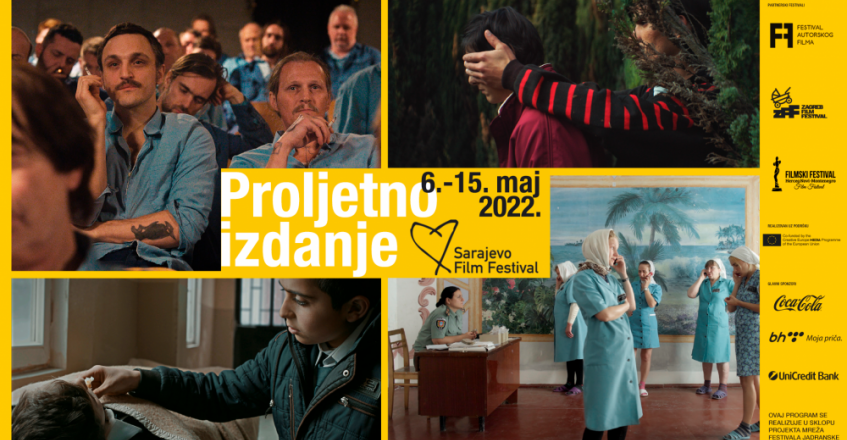 The films will be available online from May 6 until May 15 at https://ondemand.kinomeetingpoint.ba/.

The film “Brother's Keeper” won the Audience Award for Best Film of the Network of Festivals in the Adriatic Region - Adriatic Audience Award - thanks to the audience's votes at all four festivals. In addition to the films, inter-views with the authors of the films will be available as bonus content on the Ondemand.kinomeetingpoint.ba platform.

The Network of Festivals in the Adriatic Region is supported by the Creative Europe - MEDIA programme.

Just before the end of the four-year siege of Sarajevo, with a desire to support recovery of the civil society and retain the cosmopolitan spirit of the City, in 1995, Obala Art Centar starts the Sarajevo Film Festival. More than two decades later, Sarajevo Film Festival has grown into an international film festival focused on the Southeast Europe (Albania, Armenia, Austria, Azerbaijan, Bosnia and Herzegovina, Bulgaria, Croatia, Cyprus, Greece, Georgia, Hungary, Kosovo*, North Macedonia, Malta, Moldavia, Montenegro, Romania, Serbia, Slovenia, Turkey), and thanks to this festival, films, talents and future project from this region get attention of the international film public. Sarajevo Film Festival is a common platform for film business of the entire region, setting high standards in festival organisation, film promotion and presentation in the Southeast Europe.

Zagreb Film Festival is one of the central and most visited cultural events, and the largest international film festival in Croatia. It is held in November in Zagreb and presents the audience with the best of recent independent international and national film production. From its early days, ZFF aims to discover and promote modern independent film and debutant works of authors from all over the world. By offering almost two decades of festival platform, a distribution platform, and by screening works that usually miss repertoires of multiplex cinema halls, festival has played the key role in bringing up generations of audience enjoying film as an artform.

Belgrade Auteur Film Festival (FAF) is established in 1994 with a goal to present the national audience with best modern cinematographic works of art. Works shown at festivals are different from those regularly shown on silver screen – they are not to merely entertain, but to search for deeper, more realistic and more complex image of the world we live in and of the people we are. The number of visitors grows bigger each year, showing the need and importance of having events of this nature. This legendary festival of auteur film offers a programme of films awarded by world film festivals, new works of directors well known and appreciated by the festival audience, as well as interesting films showing new trends in auteur film. Every year this festival hosts a significant number of acclaimed filmmakers who take part in the programme, but also hold workshops with students.

Filmski festival Herceg Novi – Montenegro Film Festival is the most significant film festival in Montenegro, with a tradition of more than three decades. International programme focuses on competitor selections of regional feature films (official selection of competitors), documentaries and student films. Non-competing programme of Kino Evropa includes recent works of acclaimed European filmmakers. The main goal of the Festival is to promote regional and world cinematography, especially by creating space for filmmakers and films nurturing a special artistic impression, bold view of social reality, film language and production, focusing on presenting a cross section of modern poetics and expressions.