Sarajevo Film Festival on We Are One: Join Us on YouTube!

The world's biggest film festivals, including Sarajevo Film Festival, unite for a 10-day streaming event on YouTube, from May 29 – June 7 at YouTube.com/WeAreOne. 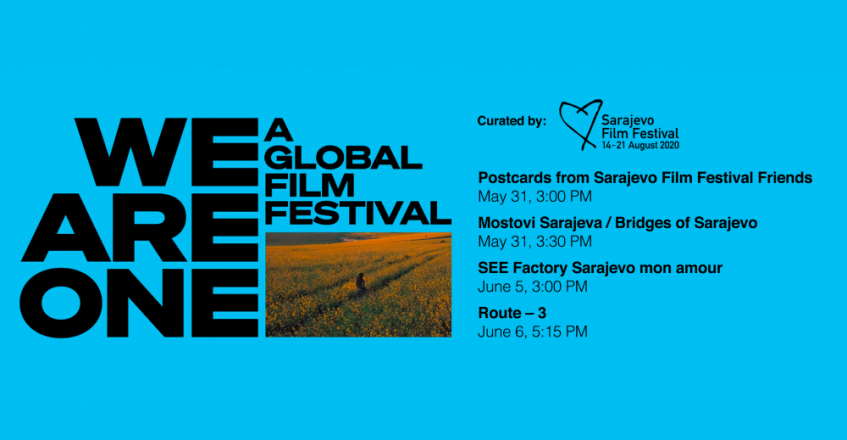 Together with over 20 other major film festivals, Sarajevo Film Festival is co-curating We Are One: A Global Film Festival.

The festival gathers some of the world’s most talented artists, storytellers and curators from 35 countries around a central effort to provide entertainment and offer relief in the form of supporting organizations responding to the COVID-19 pandemic.

The films are available for free, but audiences will be able to donate to COVID-19 relief efforts through a donate button or link on every film page via YouTube. Sarajevo Film Festival has chosen to support the Doctors Without Borders / Medicins Sans Frontieres.

Sarajevo Film Festival on We Are One:

Synopsis: European directors explore the theme of Sarajevo; what this city has represented in European history over the past hundred years, and what Sarajevo stands for today in Europe. These eminent filmmakers of different generations and origins offer exceptional singular styles and visions.

Synopsis:
IN YOUR HANDS

by Maša Šarović and Sharon Engelhart

After begging her to return, Zorica picks her daughter Maja at the airport. In the car, she tells her a surprising news and takes her to an unknown place where mother and daughter will revisit their roles.

After several years in Paris, Damir, saxophonist, returns to Sarajevo for a concert. One of his friends asked him to bring a gift to her best friend, Elma, who is waiting for Damir with some surprises...

A possessive mother, a loving son, the fiancée’s first visit, a mute witness... Four players around a pie.

by Neven Samardžić and Carolina Markowicz

Anka, 12, and Yelena, 38, have two common things: a mother in the hospital and a neighborhood grocery store where they spend their days, one inside, the other in front of. One evening, an unexpected visit provokes an incident that both women will suffer from.

Sara firmly disagree about her granddaughter’s wedding plan. To convince her not to marry, she takes Andrea to her husband grave and beg him for a sign.