Everything set for the opening of 25th Sarajevo Film Festival!

All preparations are completed for the opening of the jubilee edition of the Sarajevo Film Festival, held August 16-23 under the patronage of UNESCO. Some 3,000 colourful chairs have been set up at Raiffeisen Open Air, the Festival’s biggest venue. A new, specially designed red carpet was rolled out outside the National Theatre in Sarajevo. 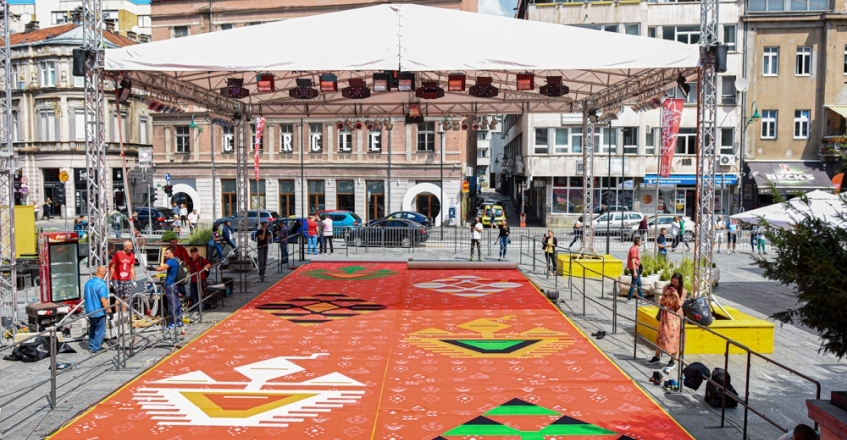 The new red carpet was designed to mark the 25th anniversary edition of the Festival and honour filmmakers, artists and festivalgoers who have been supporting us for a quarter of a century. Its pattern is inspired by a traditional Sarajevo carpet dating back to 1930, held in the National Museum of Bosnia-Herzegovina, and represents a symbiosis of modern and traditional design.
A full day of events is planed ahead of the official opening of the Festival on Friday evening. The daily program of activities begins at 09:00 with a morning screening of THE SON by Bosnian director Ines Tanović. Later in the evening, as part of the Festival’s official opening ceremony, the film will have its world premiere in the Competition Programme – Feature Film. Following the morning screening of THE SON, media representatives and members of the audience have the opportunity to participate in a Q&A session with director Ines Tanović and members of the cast. The Q&A session, as well as all press conferences of the 2019 Competition Programme –Feature Film, will be moderated by the award-winning Bosnian-born writer and screenwriter Aleksandar Hemon.
Ahead of the official opening ceremony of the 2019 Sarajevo Film Festival, some 200 artists will hold a parade through Sarajevo, under the name „Art in motion“. Organization of the parade was funded and logistically supported by Sarajevo’s Centre Municipality and its Public Youth Culture Centre. Traditional Welcome drink, to be held at 19:30 at the Festival Square outside the National Theatre, will be followed by Red Carpet ceremony and the official Opening ceremony that starts at 20:15 and will be broadcast live by the public broadcaster of Bosnia and Herzegovina, BHRT. The opening ceremony will be hosted by Bosnian actor Igor Skvarica.
Besides the screening at the National Theatre, THE SON (a coproduction between Bosnia, Croatia, Romania, Slovenia and Montenegro) will also be screened at the Raiffeisen Open Air Cinema. Members of the film’s cast and crew will introduce THE SON to the audience at both Festival venues.
On the occasion of the opening of the 2019 Sarajevo Film Festival, a gala reception for all Festival guests will be held at Hotel Europe. The Opening ceremony will conclude with a large fireworks display, co-funded by Sarajevo’s Old Town Municipality.
In cinemas in BiH in 2022, 1,118,550 viewers
„May Labour Day“ by Pjer Žalica available online from January 1st
Docu Rough Cut Boutique 2023 opens call for entries!
NETWORK OF FESTIVALS IN THE ADRIATIC REGION PRESENTS: Winter Edition
MAY LABOUR DAY by Pjer Žalica closed the 28th Sarajevo Film Festival