Dealing with the Past program of the 28th Sarajevo Film Festival will present authors who became famous with films about real events, as well as new authors who question the position of individuals whose lives have been marked by trauma from the recent past. 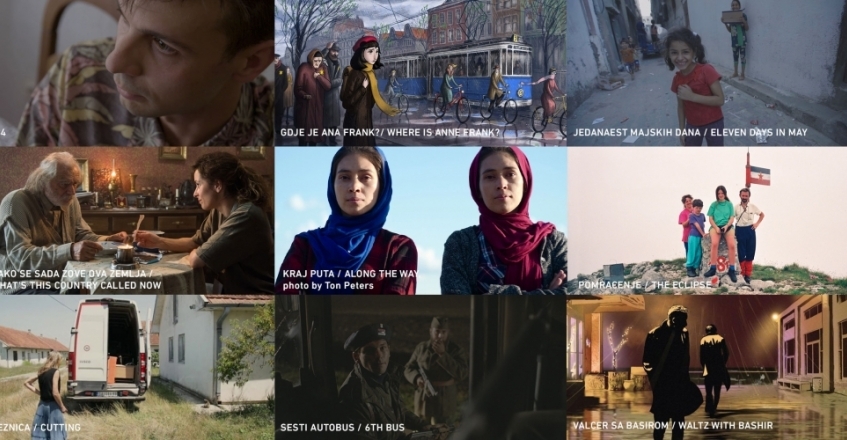 "The Programme will open with Ari Folman's cult film WALTZ WITH BASHIR, based on the author's personal experience while serving in the Israeli army in 1982. We are very pleased to share with the audience Ari's latest film WHERE IS ANA FRANK?. We will also host Michael Winterbottom, a film master strongly associated with Sarajevo, who will present his latest film ELEVEN DAYS IN MAY, which he directed together with Mohammad Sawaf. It should also be mentioned that Ari Folman and Michael Winterbottom will hold talks with the audience as part of the Masterclass program of the 28th Sarajevo Film Festival. We will also present the work of the Dutch director Mijka de Jong ALONG THE WAY. In addition, the audience will be able to recall the fate of the residents of Vukovar in 1991 and 2008 in Eduard Galić's film 6TH BUS. American director Joseph Pierson in the film WHAT’S THIS COUNTRY CALLED NOW? presents the inspiring story of Bosnian journalist Aida Čerkez from the period of the siege of Sarajevo. The second part of the program is led by a new generation of filmmakers, such as Nataša Urban, who in her award-winning film THE ECLIPSE uses an astrological event from 1999 as a leitmotif for the collective trauma of Serbian society after the recent wars in the former Yugoslavia. In the program, we will also present the film B4 by Bosnian author Alen Šimić about his return home, to the place where his parents were killed. The film CUTTING by the Serbian director Davor Marinković provides an insight into the lives of people who were displaced in the war and have been living in refugee camps ever since," said Maša Marković, manager of the programme Dealing with the Past.

Dealing with the Past also welcomes thirty young people from the Western Balkans as part of the In Youth Eyes programme, which offers a series of panels, discussions, and debates on peace activism and reconciliation practices. In Youth Eyes is organized in collaboration with the Regional Youth Cooperation Office (RYCO), forumZFD – Forum Civil Peace Service, and the USAID PRO-Future Project.

The Dealing with the Past programme is supported by the Friedrich-Ebert-Stiftung (FES).

Tickets
Tickets for the 28th Sarajevo Film Festival are on sale at the Main Box Office (Bosnian Cultural Center, Branilaca Sarajevo 24) and online at tickets.sff.ba or via the Sarajevo Film Festival website: www.sff.ba. By paying for tickets with UniCredit Mastercard® cards via the online platform, you get a 30% discount.

PROGRAMME DEALING WITH THE PAST OF THE 28TH SARAJEVO FILM FESTIVAL

One night at a bar, an old friend tells director Ari Folman about a recurring nightmare in which he is chased by twenty-six vicious dogs. Every night, the same number of beasts. The two men conclude that there’s a connection to their Israeli Army mission in the first Lebanon War of the early 1980s. Folman is surprised that he can’t remember a thing about that period of his life. Intrigued by this riddle, he decides to meet and interview old friends and comrades around the world. He needs to discover the truth about that time and himself. As Folman delves deeper and deeper into the mystery, his memory begins to creep up in surreal images.

WHERE IS ANNE FRANK? begins with a miracle: Kitty, the imaginary friend to whom Anne Frank wrote in her famous diary, comes to life in present-day Amsterdam. Unaware that seventy-five years have gone by, Kitty is convinced that if she is alive, then Anne must be alive too. WHERE IS ANNE FRANK? tells the story of Kitty’s quest across contemporary Europe to find her beloved friend. Armed with the precious diary and with help from her friend Peter, who runs a secret shelter for undocumented refugees, Kitty follows Anne’s traces, from the Annex to her tragic end in the Holocaust. Disoriented by our broken world, and the injustices that child refugees endure, Kitty wants to fulfill Anne’s cause. Through her honesty, she presents a message of hope and generosity addressed to future generations.

The border of Iran and Turkey. Dozens of people with backpacks, babies, and children. Suddenly shots are heard. Bright lights search the environment. Two girls run into the darkness, calling for their families. Zahra and Fatima, identical twins, are separated from their sisters and their mother during their flight to Europe. They wind up back in Iran, while their mother and sisters are driven into Turkey. Nineteen years old, all alone, they don’t know who to trust, where their family is, or what to do next. Here begins a journey that they seem to have no control over.

WHAT’S THIS COUNTRY CALLED NOW? is based on the experiences of Aida Čerkez, a Bosnian woman who worked as a reporter throughout the Siege of Sarajevo. In 1994, on the eightieth anniversary of the assassination of Archduke Franz Ferdinand, Aida had the idea of finding a witness to that seminal event in world history. She found Ismet, now ninety years old, who was ten years old on that fateful day in 1914. He witnessed the shot that triggered the First World War and continued to live in Sarajevo through the years of conflict that followed. Aida interviews Ismet and in the process shares her perspective on life during wartime.

CUTTING represents two generations of refugees who are still trying to create a new identity after the break-up of Yugoslavia. Mirjana and Borislav spent most of their lives in a collective center in Serbia. Now, they take a journey into the past to embrace the future and make roots and a new home.

At the unveiling of a memory plaque where his parents were killed, a director meets the man who saved his life on that very night twenty-six years ago.

On 11 August 1999, most of Europe was engrossed by a total solar eclipse, which briefly enveloped Earth in darkness. While the world at large celebrated, most of Serbia’s population, fearful of the lunar shadow, barricaded themselves in their homes and nuclear bunkers. Using this event as a metaphor for a nation’s unclean conscience about the consequences of its political choices, in this essay documentary director Nataša Urban confronts her country’s wartime and criminal past, and the evil that is still on the loose today.

Over the course of eleven days in May 2021, more than sixty children were killed in Gaza. They should never be forgotten. Narrated by Kate Winslet, with music by Max Richter, this film is a diary of those days. Through archives and personal testimony, the film tells the story of each child as an individual with many of the same hopes, dreams, and ambitions of children everywhere.

During the battle of Vukovar, a young American is trying to locate a man from her past, but he is never to be found. It is a search for identity and truth in a place where truth is selective, elusive, and even feared. A quest for faith, connection, and redemption simmers beneath the search.