In recognition of his exceptional contribution to the art of film, Honorary Heart of Sarajevo Award was given out to British actor Tim Roth. 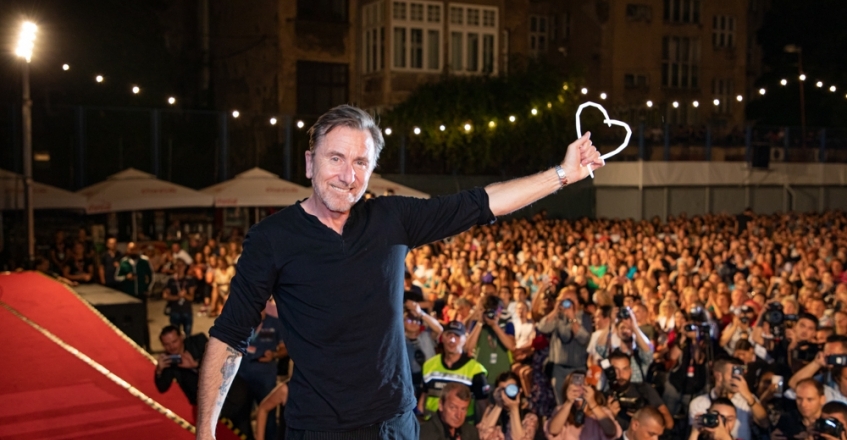 The Award Ceremony was held at 20:30 at Raiffeisen Open Air Cinema. Before that, Roth made a Red Carpet appereance with Photo Call. He also held a Masterclass on the same day, at 18:00 at Meeting Point Cinema.
Born in London, now residing in Los Angeles, Tim Roth has made a career out of portraying unforgettable characters in one independent film after another. With art being his passion, Roth spent his youth aspiring to become a sculptor and painter. But when he jokingly auditioned for a play in high school and landed the role, Roth soon found that he truly loved the craft of acting. After graduation he went on to study drama at a fine arts school in London.
Working steadily in public theatre, his first job in front of the camera was the lead in the controversial and British Prix Italia Award-winning telefilm MADE IN BRITAIN. Tim’s second project came immediately after, starring in Mike Leigh’s critically acclaimed film MEANTIME. As his success continued, Roth starred in over fifteen film and television projects including Stephen Frears’ THE HIT, for which he won the Standard Award for Best Newcomer, Peter Greenaway’s THE COOK, THE THIEF, HIS WIFE AND HER LOVER, Tom Stoppard's ROSENCRANTZ AND GUILDENSTERN ARE DEAD and Robert Altman’s VINCENT AND THEO, in which he portrayed Vincent Van Gogh.
Brought up on American films like TAXI DRIVER and MEAN STREETS, Tim had always wanted to come to United States, so he jumped at the chance when asked to take part in a publicity tour for VINCENT AND THEO. He soon after moved permanently to the States, and has since continued on the same path of offbeat films.
Roth gained worldwide recognition for his roles in two Quentin Tarantino films, RESERVOIR DOGS and PULP FICTION, Golden Globe and Academy Award winner for best screenplay. For his role in ROB ROY he has been touted as one of the best villains in screen history and earned a Golden Globe Nomination and an Academy Award Nomination for Best Supporting Actor in a Drama.
His other credits include HEART OF DARKNESS, LITTLE ODESSA, FOUR ROOMS, EVERYONE SAYS I LOVE YOU, GRIDLOCK’D, LEGEND OF 1900, DON’T COME KNOCKIN, FUNNY GAMES, THE INCREDIBLE HULK and many more.
Roth’s recent credits include BROKEN, which won the Best British Independent Film award at BIFA in 2012 and earned Tim a British Independent Film Award nomination for Best Actor, CHRONIC, which earned Independent Spirit Award nominations for Best Feature and Best Male Lead for Tim’s performance, and 600 MILLAS, which represented Mexico in the Best Foreign Language Film category at the 88th Academy Awards. He co-starred in Quentin Tarantino’s 8th film, THE HATEFUL EIGHT.
He made his directorial debut with the stunning, critically acclaimed film THE WAR ZONE, starring Ray Winstone and based on the book by Alexander Stuart. The film premiered at the 1999 Sundance Film Festival to rave reviews and was also at the Cannes Film Festival and Toronto Film Festival.
Roth starred in Brian Grazer/Imagine's Fox drama series LIE TO ME, as a cutting-edge researcher who pioneered the field of deception detection. He also co-starred in Discovery Channel’s first scripted 3-part mini-series KLONDIKE, from Executive Producer Ridley Scott, the three-part BBC drama 10 RILLINGTON PLACE, where he played the notorious serial killer John Christie, and in the International Emmy nominated BBC TV movie REG.
Roth stars in TIN STAR, a television series for Sky Atlantic, and is currently in production on Season 3. He can currently be seen in the feature film LUCE, opposite Naomi Watts and Octavia Spencer. He stars opposite Clive Owen in THE SONG OF NAMES from Sony Pictures Classics which will have its world premiere at the Toronto Film Festival this September.
In cinemas in BiH in 2022, 1,118,550 viewers
„May Labour Day“ by Pjer Žalica available online from January 1st
Docu Rough Cut Boutique 2023 opens call for entries!
NETWORK OF FESTIVALS IN THE ADRIATIC REGION PRESENTS: Winter Edition
MAY LABOUR DAY by Pjer Žalica closed the 28th Sarajevo Film Festival