26th Sarajevo Film Festival is open: culture remains one of the key threads that binds the world together

The world premiere of a new film by Pjer Žalica, FOCUS, GRANDMA, opened the 26th Sarajevo Film Festival. Before the screening, a part of the film crew had a symbolic photo shoot on the red carpet outside the National Theatre of BiH. 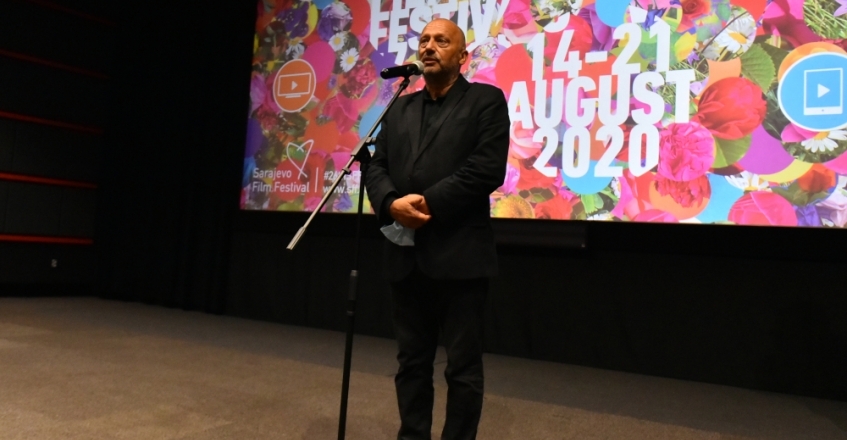 All the Sarajevo Film Festival programmes, including the film FOCUS, GRANDMA, will be broadcasted at ondemand.sff.ba online platform. Before the world premiere of FOCUS, GRANDMA, the audience was greeted and welcomed to the online festival edition by Mirsad Purivatra, Director of the Sarajevo Film Festival, in a video message.
- Ahead of us is surely the most peculiar edition of the Sarajevo Film Festival. COVID-19 has upended our lives in ways we could not have imagined at the start of this year. It has been proved once again that, in terms of production, that the culture suffers the most in moments of crisis, and at the same time it is instrumental in the preservation of basic social values. This is not only a local phenomenon. When social ties are being severed and barriers erected between countries and people, culture must remain one of the key threads that binds the world together. We have used the crisis to introduce novelties into some Festival segments. This is most evident in the way the audience can join us this year. Carefully selected films can be watched on our online platform, as well as discussions with authors, Masterclasses, and other encounters that make a difference between standard VOD platforms and a true film festival, said Mirsad Purivatra.
The opening ceremony was hosted by the BiH actress Belma Salkunić, which continued the tradition of Sarajevo Film Festival being hosted by young and perspective BiH actors and actresses.
This year's Sarajevo Film Festival in its 14 programmes brings 187 films from 56 countries. The Sarajevo Film Festival will include world premieres of 64 films, and eight films will have their international premieres.
The 26th Sarajevo Film Festival will be held until 21st August, and the programme is available at ondemand.sff.ba online platform.
In cinemas in BiH in 2022, 1,118,550 viewers
„May Labour Day“ by Pjer Žalica available online from January 1st
Docu Rough Cut Boutique 2023 opens call for entries!
NETWORK OF FESTIVALS IN THE ADRIATIC REGION PRESENTS: Winter Edition
MAY LABOUR DAY by Pjer Žalica closed the 28th Sarajevo Film Festival