Festivals are places that help us decide about our future direction together, and show ourselves as members of the same community – a film community. Together we bring special and new experience of a regional film festival 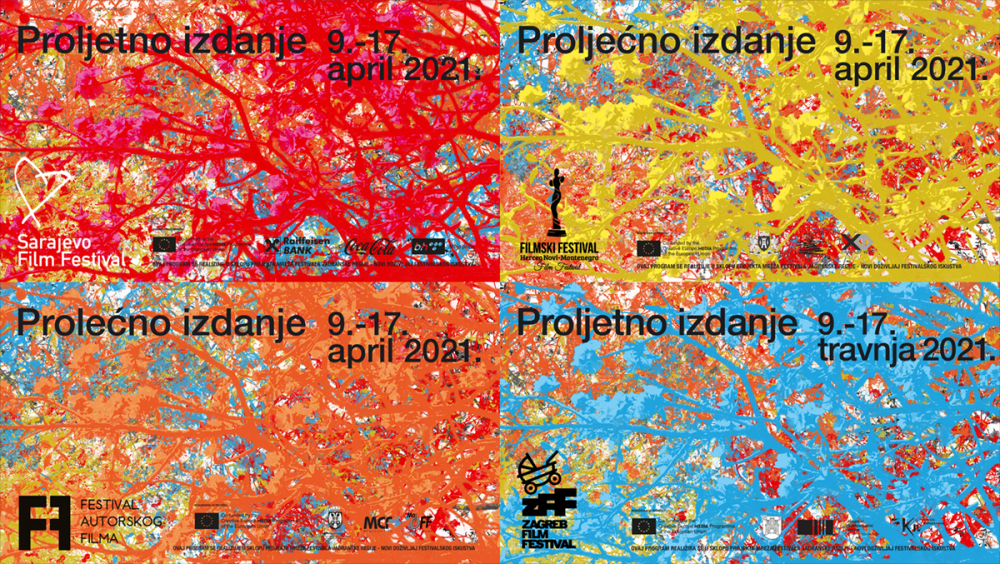 The first regional film festival will take place as a part of the Network of Festivals in the Adriatic Region. It will be held from April 9th to 17th 2021 at ondemand.kinomeetingpoint.ba, and will feature films selected by selectors of these four festivals. It will be the spring edition of each of these festivals.

“Today, when we need to connect more than ever, we are lucky to be here, joined over the first regional film festival, in the Network of Festivals in the Adriatic Region. Festivals are meeting points, places to gather and share. That is what we need to enable us to work on rebuilding our social capital, questioning the current models of film production, and shaping our common future. Festivals are places where we can decide about our future direction together and show ourselves as members of the same community - a film community. Together we bring a special, new experience of a regional film festival”, it is stated in the joint statement by representatives of the Sarajevo Film Festival, Zagreb Film Festival, Auteur Film Festival and Montenegro Film Festival.

The first edition of the regional film festival will present a programme of films that would otherwise be unavailable to the audiences. The list includes Yugoslavian classics, first film authors, multi-awarded films, the most interesting European and world titles. In addition to the films, the audience will be able to watch interviews with some of the authors of the films in the programme.

Spring Break edition of the festival as a part of the Network of Festivals in the Adriatic Region is a beginning of cooperation and joining of the festivals, and this year’s edition each of the festivals will show films from the new, common selection of films.

The COVID 19 crisis has forced the film industry to rethink things. These important festivals of the same speaking area are of different sizes and profiles, but they all share one common mission – to serve as a platform to promote European audio-visual content and talents. Partnership between the festivals will help in retaining the audience and building new ones, and in improving organisation and realisation of the festival using modern technology.

“We invite the public to use the opportunity to see some of the new and unique cinematographic voices, to rediscover classics, and join us in these times of epidemic in using film industry as a tool to bring back the feeling of togetherness and closeness!”.

Network of Festivals in the Adriatic Region is supported by Creative Europe Media Programme.

Just before the end of the four-year siege of Sarajevo, with a desire to support recovery of the civil society and retain the cosmopolitan spirit of the City, in 1995, Obala Art Centar starts the Sarajevo Film Festival. More than two decades later, Sarajevo Film Festival has grown into an international film festival focused on the Southeast Europe (Albania, Armenia, Austria, Azerbaijan, Bosnia and Herzegovina, Bulgaria, Croatia, Cyprus, Greece, Georgia, Hungary, Kosovo*, North Macedonia, Malta, Moldavia, Montenegro, Romania, Serbia, Slovenia, Turkey), and thanks to this festival, films, talents and future project from this region get attention of the international film public. Sarajevo Film Festival is a common platform for film business of the entire region, setting high standards in festival organisation, film promotion and presentation in the Southeast Europe.

Zagreb Film Festival is one of the central and most visited cultural events, and the largest international film festival in Croatia. It is held in November in Zagreb and presents the audience with the best of recent independent international and national film production. From its early days, ZFF aims to discover and promote modern independent film and debutant works of authors from all over the world. By offering almost two decades of festival platform, a distribution platform, and by screening works that usually miss repertoires of multiplex cinema halls, festival has played the key role in bringing up generations of audience enjoying film as an artform.

Belgrade Auteur Film Festival (FAF) is established in 1994 with a goal to present the national audience with best modern cinematographic works of art. Works shown at festivals are different from those regularly shown on silver screen – they are not to merely entertain, but to search for deeper, more realistic and more complex image of the world we live in and of the people we are. The number of visitors grows bigger each year, showing the need and importance of having events of this nature. This legendary festival of auteur film offers a programme of films awarded by world film festivals, new works of directors well known and appreciated by the festival audience, as well as interesting films showing new trends in auteur film. Every year this festival hosts a significant number of acclaimed filmmakers who take part in the programme, but also hold workshops with students.

Herceg Novi Film Festival – Montenegro Film Festival is the most significant film festival in Montenegro, with a tradition of more than three decades. International programme focuses on competitor selections of regional feature films (official selection of competitors), documentaries and student films. Non-competing programme of Kino Evropa includes recent works of acclaimed European filmmakers. The main goal of the Festival is to promote regional and world cinematography, especially by creating space for filmmakers and films nurturing a special artistic impression, bold view of social reality, film language and production, focusing on presenting a cross section of modern poetics and expressions.