Sarajevo Film Festival pays tribute to director Pawel Pawlikowski and honours him for his outstanding contribution to the art of film and his lasting friendship with the city of Sarajevo and Bosnia and Herzegovina. The acclaimed director was presented with the Honorary Heart of Sarajevo Award. 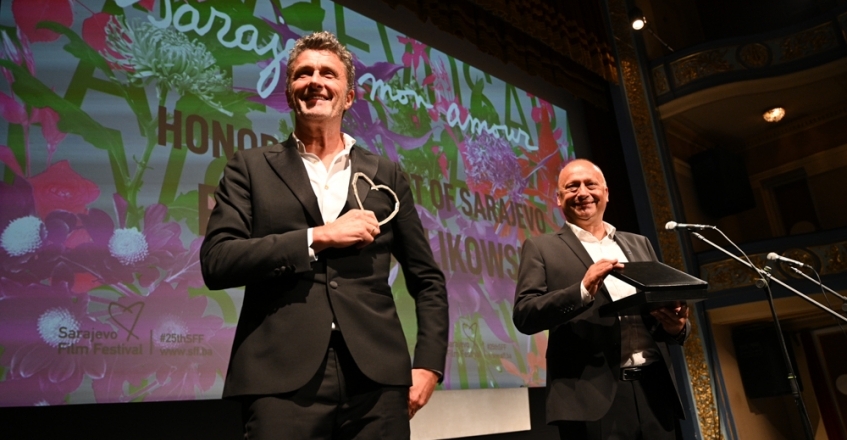 Pawlikowski is also honoured with a retrospective of his works - including documentaries he made for the BBC and his most recent feature films such as IDA and COLD WAR - in the Festival’s Tribute to programme.
Pawlikowski is returning to the Sarajevo Film Festival for the third time. In 2010 he presented IDA to the Festival audience and in 2018 COLD WAR opened the 24th edition of the Festival.
Pawlikowski was born in Warsaw in 1957 and left Poland at the age of fourteen first for the United Kingdom, Germany and Italy, before finally settling in the UK in 1977. He studied literature and philosophy in London and Oxford. He started making documentary films for the BBC in the late 1980s. His documentaries, which include FROM MOSCOW TO PIETUSHKI: A JOURNEY WITH BENEDICT YEROFEYEV (1990), DOSTOEVSKY’S TRAVELS (1991), SERBIAN EPICS (1992) and TRIPPING WITH ZHIRINOVSKY (1995), won numerous international awards including an Emmy and the Prix Italia. In 1998, Pawlikowski moved into fiction with a low budget TV film, TWOCKERS, which was followed by two full-length features, LAST RESORT (2000) and MY SUMMER OF LOVE (2004), both of which he wrote and directed. Both films won British Academy of Film and Television Arts (BAFTA) awards, as well as many others at festivals around the world. After the 2011 film THE WOMAN IN THE FIFTH, Pawlikowski made highly acclaimed IDA which won the 2015 Foreign Language Academy Award, five European Film Academy Awards, a Bafta and a Goya, among many other prizes. Pawlikowski returned to Poland in 2013 while completing IDA. He currently lives in Warsaw and teaches film direction and writing at the Wajda School.
His latest film, COLD WAR, is a timeless historic romance (inspired by his own parents’ story). It won the Best Director award at the 2018 Cannes Film Festival and was the big winner at the 2018 European Film Awards where it picked up the prizes for Best European Film, Director, Screenwriter and Actress (Joanna Kulig). COLD WAR was recently honored with three Academy Award nominations: in the best foreign-language film, best director and cinematography (Lukasz Zal) categories.
Praised by film critics and loved by audiences, Pawlikowski is an auteur whose films mirror his personal experiences, as well as his ethic values and artistic vision. His films reveal an immense talent, deep understating of historic changes and a strong sense of the interaction between personal and historical. In his own words, Pawlikowski is guided in his work by a desire to find new meaning in what is well-known and already seen.  “For me, that’s the essence of cinema: photographing reality and making it mean more. Not going with the flow as realism is supposed to do, but on the contrary looking at reality against the grain, discovering its strangeness.” (Vertigo, November 2007).
In cinemas in BiH in 2022, 1,118,550 viewers
„May Labour Day“ by Pjer Žalica available online from January 1st
Docu Rough Cut Boutique 2023 opens call for entries!
NETWORK OF FESTIVALS IN THE ADRIATIC REGION PRESENTS: Winter Edition
MAY LABOUR DAY by Pjer Žalica closed the 28th Sarajevo Film Festival