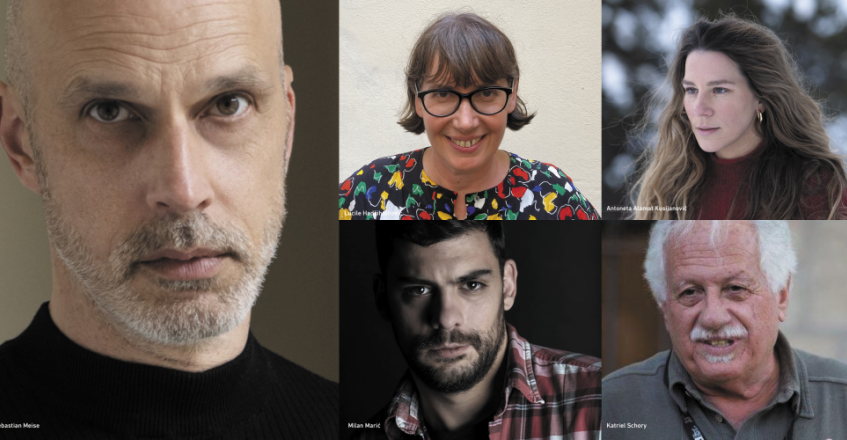 Sebastian Meise is an Austrian director and screenwriter. He studied painting and philosophy before he turned to filmmaking and co-founded the Viennese production company Freibeuter Film. His acclaimed debut feature film, “Still Life”, premiered at the San Sebastián International Film Festival and won several awards. His documentary film “Outing” was presented at the Hot Docs Festival in Toronto. His latest feature film “Great Freedom” was shown at the Cannes Film Festival, where it was awarded the Jury Prize - Un Certain Regard. The film was also awarded the Heart of Sarajevo for Best Feature Film and for Best Actor Georg Friedrich, as well as the CICAE Arthouse Award at the 27th Sarajevo Film Festival. “Great Freedom” was shortlisted for the Oscars ®, and won numerous international awards.

Lucile Hadžihalilović studied art history before graduating from the Paris film school IDHEC (now La Fémis). Her debut mini-feature “La Bouche De Jean-Pierre” premiered in Un Certain Regard in Cannes in 1996. In 2004, “Innocence” received the awards for Best First Film in San Sebastian, Best film and Best photography in Stockholm Film Festival. “Evolution” (co-written with Alanté Kavaïté) picked up the Special Jury Prize and Best Photography in San Sebastian in 2015, and Best Director award at Dublin film festival. Her latest film “Earwig” (co-written with Geoff Cox) received the Special Jury Prize in San Sebastian in 2021. She has received the Méliès Career Award in recognition of her contribution to European genre cinema at Sitgès Film Festival in 2021. Additionally, Lucile Hadžihalilović has directed the short films “Good Boys”, “Nectar” and “De Natura”. She edited and produced Gaspar Noe’s “Carne” and “I Stand Alone” and is also his production partner in the company Les Cinémas de la Zone.

Antoneta Alamat Kusijanović is a writer-director born in Dubrovnik, and based in New York. Her directorial feature debut, “Murina”, executive produced by Martin Scorsese, premiered in Directors Fortnight at the 2021 Cannes Film Festival and won the Caméra d’Or Award for Best Debut Film. Her short film “Into the Blue”, was nominated for a Student Academy Award, and won awards at the Berlin International Film Festival, Sarajevo Film Festival, among many others. Alamat Kusijanović is an alumna of the Résidence Cinéfondation and Jerusalem Film Lab. She holds an MFA in writing-directing from Columbia University in New York and Masters in Producing from the Academy of Dramatic Arts in Zagreb, Croatia.

Milan Marić was born in 1990 in Belgrade. In 2013 he graduated from the Faculty of Dramatic Arts, University of Arts in Belgrade, with a degree in acting. Immediately after graduation, he became a member of the ensemble Yugoslav Drama Theatre in Belgrade. He starred in films such as “The Man Who Defended Gavrilo Princip” (2014), “A Good Wife” (2016), “Humidity” (2016), “Dovlatov” (2018), and “Toma” (2021), among others. For his role in the film “Dovlatov” by Aleksey German, he won the award for Best Young Actor at the 40th International Film Festival in Moscow in 2018. He was listed among the ten biggest European Shooting Stars at the 2019 edition of the Berlinale.

Katriel Schory studied at the New York University (NYU) Film School. For 25 years a producer, he produced over 150 films and television programs, including feature films, documentaries, TV dramas, international co-productions and production services. For 21 years, Schory is the Executive Director of the Israel Film Fund. He authorized the production of more than 300 full length in Israel and worldwide. Among the films he authorized, many won prestigious awards, including 4 Oscar ® nominations in the Foreign Film Category of the American Academy, Golden and Silver Lions in Venice and Bears in Berlin. Schory received the Chevalier de l'ordre des Arts et des Lettres, Berlinale Kamera for Outstanding Contribution to the Film industry, Special Medallion for Outstanding achievements at the Telluride Film Festival, Lifetime achievements at the Jerusalem Film Festival, FIAPF Award - The FIAPF - International Federation of Film Producers Associations Award for outstanding achievement in film in the Asia Pacific region, the Variety Award and others.

Sebastian Meise, the Jury President of the 28th Sarajevo Film Festival, on coming back to Sarajevo in 2022: “I have always had a personal connection to the Sarajevo Film Festival and I am deeply honored to be part of the jury this year. Sarajevo is a special place and the unique founding spirit of the festival is omnipresent here. It is the deeply humanistic belief that film can do what politics cannot: unite people.”