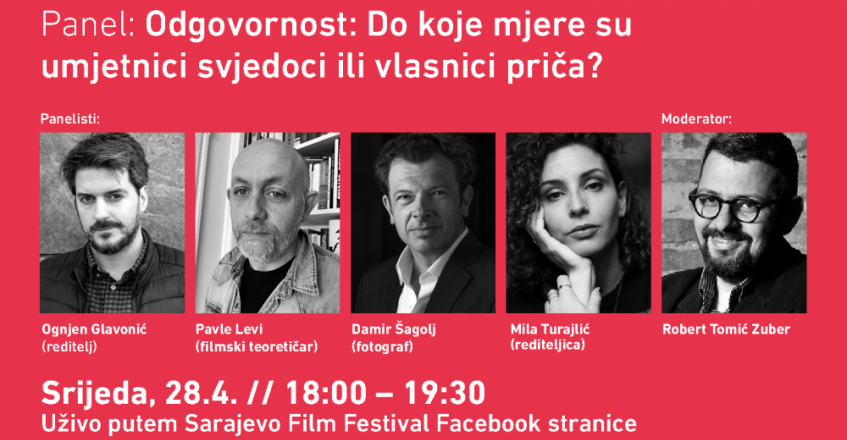 From 24 to 30 April, Sarajevo Film Festival presents a special edition of the Dealing with the Past programme, which will be available to the audience for free online across the region and for the audience in Sarajevo the programme will be avaliable also at the Meeting Point cinema.

The programme with 10 films and talks with filmmakers will be available online at Ondemand.kinomeetingpoint.ba from tomorrow to 30 April to the viewers across the region - in Bosnia and Herzegovina, Croatia, Serbia, Montenegro, North Macedonia, and Slovenia.

On Tuesday, 27 April, the ‘Drama Series as an Ideological Tool and Catalyst for Change’ panel will be held.

With the revival of drama series production in the region in the past three years, we have often watched characters and episodes from their lives which marked the history of this region. The new drama pieces have encouraged us to question views or understandings of different historical events. To what extent do extremely high quality production, costumes, and sets, as the most prominent elements of a series, affect our perception of the past? How much are public broadcasters, as the main funders of drama series, susceptible to ideological fictionalisation of a narrative? What do series set in the past say about our societies today?
The discussion includes film critic Jurica Pavičić, historian Dragan Markovina, director and creator of the ‘Family’ series Bojan Vuletić, and playwright Ines Mrenica. The moderator is Robert Tomić Zuber.

On Wednesday, 28 April, the ‘Responsibility: To what Extent are Artists Witnesses or Owners of Stories?’ panel will be held.

The process of building film narrative based on historical facts or inspired by true events requires additional detailed research and great commitment. Authors often use film solutions that make the film narrative stronger, but at the same time they move away from the true events. This panel strives to examine the relationship between authenticity and limits of artistic interpretation of a historical event. When there is a living witness on whose life the film is based, is it possible to reconcile a personal perception of events with film solutions that make the film narrative stronger and more unified? To what extent are artists witnesses or owners of stories?
The panellists are photographer Damir Šagolj, director Mila Turajlić, director Ognjen Glavonić, and film theory professor at Stanford Pavle Levi. The moderator is Robert Tomić Zuber.

The Dealing with the Past programme from 24 to 30 April includes 10 films: a new film by Jasmila Žbanić, ‘Quo Vadis, Aida?’, the first feature film about Srebrenica, candidate of Bosnia and Herzegovina for the Oscar® in the category of best international feature film, ‘Son of Saul’ (2015) by Lászlo Nemes, winner of Oscar® for best foreign film, directing debut by Dana Budisavljević ‘The Diary of Diana B.’ (2019), ‘The Painted Bird’ (2019) by Czech director Václav Marhoul, based on a famous eponymous novel by Jerzy Kosiński, ‘Chris the Swiss’ (2018) by Anja Kofmel, ‘Srbenka’ (2018) by Nebojša Slijepčević, winner of the Heart of Sarajevo for best documentary film and Audience Award for best documentary film at the Sarajevo Film Festival 2018, ‘The Load’ (2018) by Ognjen Glavonić, ‘Men Don’t Cry’ (2017) by Alen Drljević, and ‘Yugoslavia: How Ideology Moved Our Collective Body’ (2013) by Marta Popivoda. The programme also includes a short film by Alban Ukaj ‘The Pit’ (2019), following the making of a short film about a war crime in Sarajevo.

The entire programme is free, and the number of film viewings is limited.

Dealing with the Past is a programme of Sarajevo Film Festival supported by the Robert Bosch Stiftung Foundation.