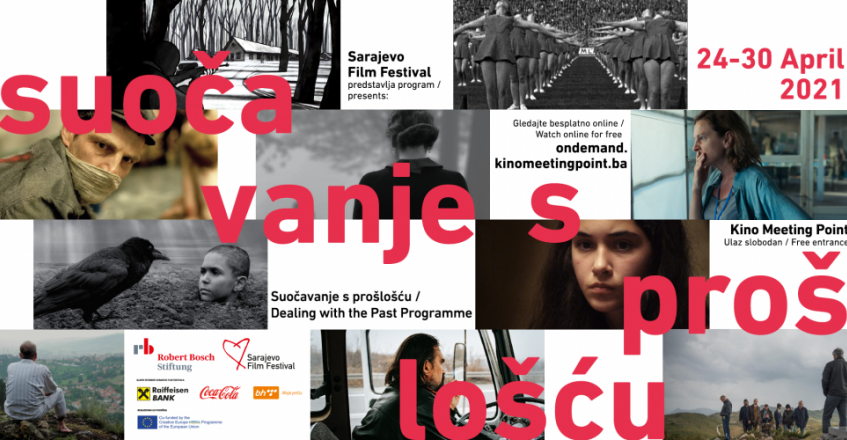 From 24 to 30 April, a special programme will be held, showing 10 films – nine feature and one short, talks with filmmakers, and panel discussions, and the entire programme is free.

Sarajevo Film Festival began this programme in 2016 with the aim to to initiate an honest dialogue about the recent past of our region. This is a prerequisite to overcome problems arising from the recent wars in former Yugoslavia, which irreparably marked our societies. In the past five years, we have shared many extremely painful, but inspiring stories from all over the world in this programme.

This special edition, from 24 to 30 April, presents films from previous editions of Dealing with the Past, films awarded at numerous festivals, dealing with topics from the wars in the region. A special gift for the programme audience is the new film by Jasmila Žbanić, “Quo Vadis, Aida?”. The entire programme will be available for free: online at Ondemand.kinomeetingpoint.ba to the audience from the entire region – Bosnia and Herzegovina, Croatia, Serbia, Montenegro, North Macedonia, and Slovenia, and the audience in Sarajevo will also be able to watch the films at the Meeting Point cinema with free entry for all the screenings.

The programme includes nine feature films and one short. These are “Quo Vadis, Aida?” (2020) by Jasmila Žbanić, the first feature film about Srebrenica, official entry of Bosnia and Herzegovina for the Oscar® in the category for the Best International Feature Film. The number of codes for the film is limited. The programme also includes “Son of Saul” (2015) by Lászlo Nemes, a debut feature film of the Hungarian director, awarded for its original and incredibly powerful depiction of the horror of Holocaust with Oscar® for the best foreign film.

The programme includes a debut of the Croatian film director Dana Budisavljević “The Diary of Diana B.” (2019), a documentary-feature story about a woman who saved lives of more than 10,000 children imprisoned in the Nazi concentration camps during the Second World War. “The Painted Bird” (2019) by the Czech director Václav Marhoul is based on a famous, eponymous novel by Jerzy Kosiński and it describes the Second World War from the perspective of a boy. “Chris the Swiss” (2018) by Anja Kofmel takes the viewers to a painful search for the truth and confronts them with ghosts of the past that still haunt our lives, demanding to be understood and reconciled with. The programme also includes “Srbenka” (2018) by Nebojša Slijepčević, winner of the Heart of Sarajevo for the best documentary film and Audience Award in 2018. In the winter of 1991, Aleksandra Zec, a Serb nationality girl was killed in Zagreb. 25 years later in Rijeka, the director Oliver Frljić makes a theatre play about this case. The process of working on this play becomes collective psychotherapy.

“The Load” (2018) by Ognjen Glavonić talks about a man from Pančevo who receives money to transfer a truck with a mysterious load from Kosovo to Belgrade during the bombing of Serbia (1999). “Men Don’t Cry” (2017) by Alen Drljević follows ten men, gathered in a mountain hotel in Bosnia 15 years after the war – a trainer and ten participants in a workshop, former soldiers from opposing sides, which should help them face the past. The oldest film in the programme is “Yugoslavia: How Ideology Moved Our Collective Body” by Marta Popivoda from 2013, dealing with the performance of ideology in the public space through mass performances. The programme also includes a short film by Alban Ukaj “The Pit” (2019) – following the making of a short film about a war crime in Sarajevo.

The programme will also include panels with regional journalists, artists, and teachers to initiate discussions about specific topics. The panel sessions will be broadcasted live on the Facebook page of Sarajevo Film Festival.

Dealing with the Past is a programme of Sarajevo Film Festival supported by the  Robert Bosch Stiftung Foundation.