One of Britain’s most distinctive and provocative directors Stephen Frears recieved the Honorary Heart of Sarajevo Award tonight for his extraordinary contribution to the art of film. 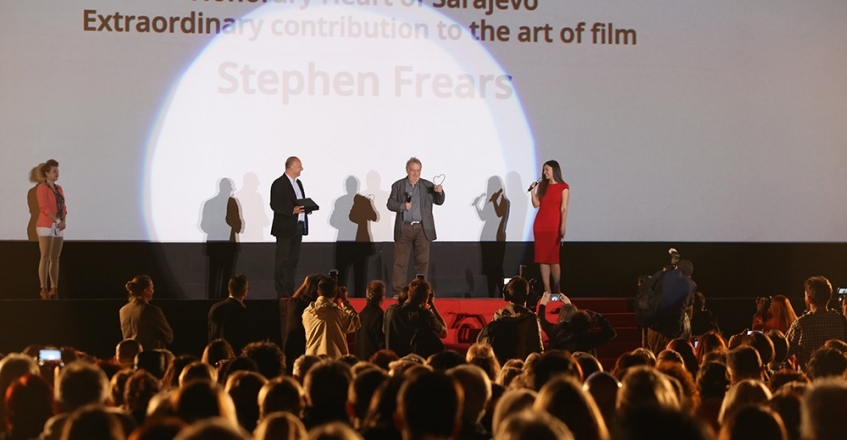 Born in Leicester in 1941, he studied law at Cambridge University before working in THE theatre at the Royal Court and then working as Assistant Director to Karel Reisz on MORGAN and to Lindsay Anderson on IF. In the 70’s, he directed many notable television plays, written by Alan Bennett, Tom Stoppard, Peter Prince, Neville Smith and Adrian Mitchell.

His breakthrough as a feature film director came with the low budget hit MY BEAUTIFUL LAUNDRETTE in 1985. Initially intended for television and written by Hanif Kureishi, the film was given an international release and became a critical and commercial success.

Frears made his Hollywood debut with DANGEROUS LIAISONS in 1989, which received six Oscar nominations, followed by THE GRIFTERS produced by Martin Scorsese, which gained him an Oscar nomination for Best Direct in 1991. He directed the 20th century western THE HI LO COUNTRY in 1998, returning ot more familiar territory with HI FIDELITY, a humorous look at the nature of commitment.

In 2003 Frears returned to British television to direct THE DEAL, which looked at a pivotal moment in the relationship between Gordon Brown and Tony Blair and was the first time the two figures had been represented on TV. Featuring Michael Sheen at Tony Blair and written by Peter Morgan the film won BAFTA Award for Best Single Drama in 2004. In 2005, he directed Judi Dench and Bob Hoskins in MRS HENDERSON PRESENTS followed by THE QUEEN with Helen Mirren, which has been highly acclaimed both commercially and critically, earned him an Oscar nomination, was awarded a BAFTA for Best Film and for which Helen Mirren won an Oscar.

In 2009 he directed CHERI adapted from the Colette book by Christopher Hampton starring Michellle Pfeiffer and Rupert Friend about an ageing courtesan in turn of the century Paris and her love affair with the young son of her friend. In 2010 his film TAMARA DREWE, based on the book by Posy Simmonds, took an ironic look at life in the quiet of the English countryside. He followed this with LAY THE FAVOURITE with Bruce Willis and Rebecca Hall and MUHAMMAD ALI'S GREATEST FIGHT with Benjamin Walker, Christopher Plummer, Danny Glover, Barry Levinson and Frank Langella for HBO. In 2013 he directed PHILOMENA, based on the Martin Sixsmith book, THE LOST CHILD OF PHILOMENA LEE adapted for the screen by Jeff Pope and Steve Coogan with Judi Dench and Steve Coogan. Last year Frears directed THE PROGRAM about Lance Armstrong.

Stephen Frears was a guest of Sarajevo Film Festival’s Tribute To Programme in 2002.