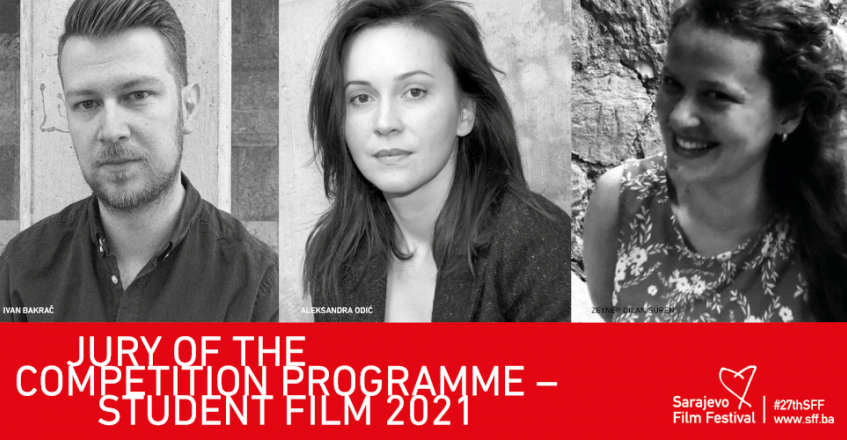 Ivan Bakrač
Director, Montenegro
Ivan Bakrač completed BA and MA studies in film directing at the Faculty of Arts and Design in Belgrade. He is a director and screenwriter of award-winning films that have been selected for a number of international festivals. He is an alumnus of Berlinale Talents, Talents Sarajevo, and the Zurich Film Festival Academy, among other training programmes. He works as a festival programmer and is the author of the short films OUR SKIN IS GOING TO GRAY and MALESH, the featurette WARS and the feature-length AFTER THE WINTER.
Aleksandra Odić
Director, Bosnia and Herzegovina
Aleksandra Odić is a Berlin-based film director. Her work as an actress was followed by studies in film directing at the German Film and Television Academy Berlin. Her medium-length film GREAT WALL OF CHINA had its world premiere at the Sarajevo Film Festival in 2017 and its German premiere at the Berlin International Film Festival in 2018. Her most recent short film, FRIDA, premiered at the Festival de Cannes in 2021 in the Cinéfondation programme and won the Queer Palm for Best Short Film and the Lights on Women Award.
Zeynep Dilan Süren
Director, Turkey
Zeynep Dilan Süren is a graduate of the University of Bahçeşehir's Film and Television Department and studied for her MA at the Film and Drama Department of the University of Kadir Has in Istanbul. Her film THE GREAT ISTANBUL DEPRESSION won the Heart of Sarajevo for the Best Student Film at the Sarajevo Film Festival in 2020.
Competition Programme – Student Film 2021.
Asja Krsmanović, selector of the Competition Programme – Student Film picked 12 titles. The selection features four world premieres, three international and five regional premieres.
WORLD PREMIERES
BARLEY / JEČAM ŽELA
Montenegro, 2021, 18 min.
Director: Andrija Mugoša
A day in the life of Jakov, a family man who has decided to have his daughter baptised. On the day of the blessing, her future godfather, Jakov’s best friend Peter, reveals a secret about Jakov’s life before he had made “all the right decisions.” Pressured by society, the system and his wife, Jakov decides to find salvation through the Church.
SUMMER PLANNING / PLANURI DE VACANTA
Romania, 2021, 26 min.
Director: Alexandru Mironescu
All Andrei wants is to leave for summer camp, together with his friends, once the school year is over. Meanwhile, his parents are caught up with their divorce.
WHEN NIGHT LOST / OTAN ECHASE I NICHTA
Greece, 2021, 17 min.
Director: Asteris Tziolas
Summer in the heart of Athens. Two strangers enter a place that looks like an oasis amid the deserted night landscape of the city. Above the pulsating lights and the dim sounds of some old pinball machines, the two of them will come closer and try to break the darkness that is hidden inside them.
WHEN THE MORNING DAWNS / KAD JUTRO SVANE
Bosnia and Herzegovina, 2021, 23 min.
Director: Karmen Obrdalj
A lonely, self-conscious young woman spends her days drinking wine on the roof and waiting for her boyfriend to come home. She can sense that something is wrong – he has suddenly become cold towards her. A lack of sex and his friendship with another woman worsens her body image.
INTERNATIONAL PREMIERES
APARTMENT X / APARTAMENTUL X
Romania, 2020, 14 min.
Director: Marius Papară
The walls have ears, and the viewfinder and window oversee everything. In the context of a virus and a global lockdown, the inhabitants of one neighbourhood deny the existence of the pandemic, continuing their daily life as always.
OTAVA
Slovenia, 2021, 15 min.
Director: Lana Bregar
An adolescent girl tries to dream about memories of Mother while having to be physically present on the farm with grandmother.
WAIT FOR ME / ČEKAJ ME
Croatia, 2020, 42 min.
Director: Damir Markovina
WAIT FOR ME tells the story of the relationship between an aging mother and her adult daughter, who have been permanently separated by a physical border drawn during the 1990s wars in the Balkans, and the way in which they are accepting the fact that one of them will have to die.
REGIONAL PREMIERES
DUSK / FÉLHOMÁLY
Hungary, Belgium, Portugal, 2020, 21 min.
Director: Bálint Bíró
This ominous documentary views a global theme from the perspective of a small Hungarian community. A “landguard” and his son go on patrol on the border area near Serbia, where an invisible danger looms.
EATING SOIL / ERDE ESSEN
Austria, 2021, 26 min.
Director: Laura Weissenberger
This essay film deals with stories of Colombian women that arise from director Laura Weissenberger’s memories of and projections onto her home country. It explores Colombian narrative culture based on the stories of a fictional family, which metaphorically represent a society rather than individual fates. Structured like memory itself, the film invites the viewer to encounter subjects involving migration, hope, regret and approaches to life.
FONICA M-120
Hungary, 2020, 24 min.
Director: Olivér Rudolf
Ten-year old Aron lives with his mother in a room of a junk motel. Hovering around the adults, he creates his own imaginary world, led by his father, a song and a jukebox. One day, a new guest arrives at the motel and Aron's world is turned upside down. He has to choose where he belongs.
LOVE STORIES ON THE MOVE / PRIN ORAȘ CIRCULĂ SCURTE POVEȘTI DE DRAGOSTE
Romania, 2021, 21 min.
Director: Carina-Gabriela Dașoveanu
Lili, a thirty-six-year-old taxi driver, is trying to save her marriage to Dani, an amateur fisherman. Her car rides place Lili in front of several love stories that are very  different from her own.
REDUCTION
Hungary, 2021, 11 min.
Director: Réka Anna Szakály
Two girls live together along the post-apocalyptic coast and share the goal of reaching the other side in the hope of finding of a better life. When a mysterious character enters the life of one of the girls, however, a chain of irreversible events begins. Relationships fall apart along with the very world around them.
The 27th Sarajevo Film Festival will take place 13-20 August 2021.
Competition Programme – Student Film Jury and selection of the 28th Sarajevo Film Festival
Competition Programme – Student Film Jury and selection of the 27th Sarajevo Film Festival
Competition Programme - Student Film 2020
Competition Programme – Student Film Jury 2019
Competition Programme - Student Film 2019