Tonight in Coca-Cola Open Air Cinema the classic film PARIS, TEXAS (1984) by Wim Wenders was screened. Wim Wenders is this year's Honorary Heart of Sarajevo recipient, with a Tribute To programme dedicated to his work. 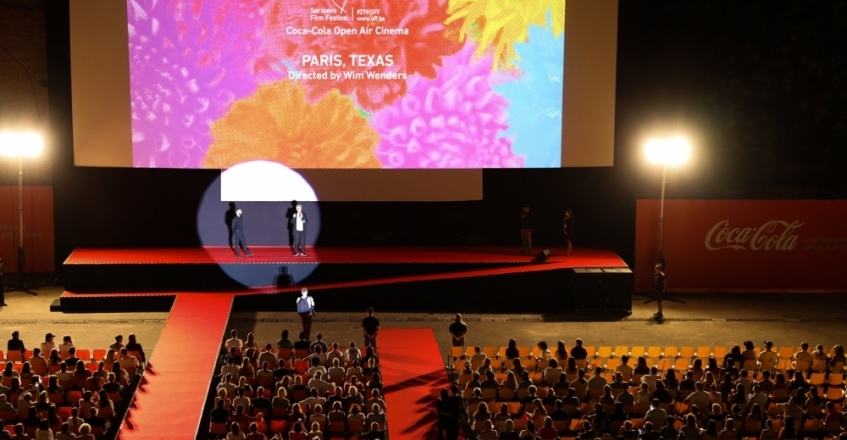 This unconventional road movie is based on a script by Pulitzer Prize-winner Sam Shepard and tells the story of Travis, a man who wanders out of Mexico and into Texas one day, in the blazing heat of the “Big Bend”. Travis does not speak a word. He also seems to have largely lost his memory. But he is driven by his wish to find his family again: his young wife Jane, whose life he seems to have placed in danger through his pathological jealousy, and his seven-year-old son Hunter. For four years Travis was thought to be dead. His brother Walt flies from LA to Texas to bring back his lost brother. Walt and his wife Ann have become Hunter’s foster parents. It is very difficult for the two of them to now give this role up again, especially when they learn that Travis wants to go out in search of Jane together with his son. They know nothing about her, except that she probably lives in Houston...
You can watch the movie in one of the following showings.
Director: Wim Wenders
Cast: Harry Dean Stanton, Nastassja Kinski, Dean Stockwell, Aurore Clément, Hunter Carson, Bernhard Wicki
Dragan Bjelogrlić's TOMA closed the 27th Sarajevo Film Festival tonight
New film by Asghar Farhadi A HERO in the Open Air programme
RIDERS OF JUSTICE in the Open Air programme tonight
The Honorary Heart of Sarajevo to Michel Franco
Wim Wenders' PARIS, TEXAS in the Coca-Cola Open Air Cinema tonight