Introducing the Kinoscope Programme of the 28th Sarajevo Film Festival

The Sarajevo Film Festival announces this year's Kinoscope programme. The programme will feature 18 films, six of which belong to the Kinoscope Surreal section. 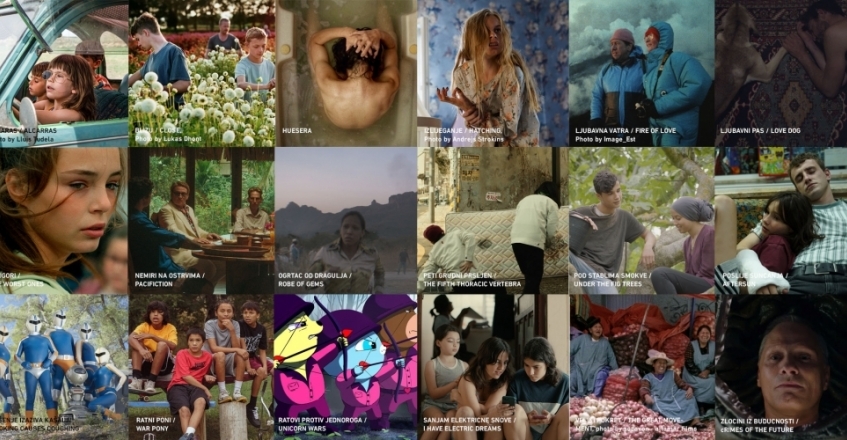 “Kinoscope is a program which pays special attention to emerging talents and new trends in contemporary cinema from around the world, excluding films from countries eligible for the competitions. This year 10 out 18 films are debut films. The films all share a vitality and diversity in their cinematic language. This year is special in the sense that the films we programmed can be put in dialogue with each other. We don’t really look for films with specific topics, but once the selection is finalized, we like to find some thematic threads. Last year several of the Kinoscope films were exploring family ties. This year we realized many films were about loss”, said Mathilde Henrot and Alessandro Raja, programmers of the Kinoscope Programme.

Tickets
Ticket sales for films in the programme of the 28th Sarajevo Film Festival at the Main Box Office (Bosanski kulturni centar, Branilaca Sarajeva 24) will begin tomorrow, August 8 at 10 a.m.

As far as back they can remember, the Solé family spent every summer picking peaches in their orchard in Alcarràs, a small village in Spain. But this year’s crop could be their last, as they face eviction. The new plans for the land include cutting down the peach trees and installing solar panels, which causes a rift within the large tight-knit family. For the first time, they face an uncertain future and risk losing more than their home.

Sophie reflects on the shared joy and private melancholy of a holiday she took with her father twenty years earlier. Memories, real and imagined, fill the gaps between mini-DV footage as she tries to reconcile the father she knew with the man she didn’t.

The intense friendship between thirteen-year-old boys Léo and Remi is suddenly disrupted. Struggling to understand what has happened, Léo approaches Sophie, Rémi's mother. CLOSE is a film about friendship and responsibility.

Intrepid French scientists Katia and Maurice Krafft devoted their lives to uncovering the mysteries of volcanoes, chasing fire around the world and, in the process, capturing some of the most spectacular imagery of Earth ever recorded. Told through the lenses of this magnetic couple, FIRE OF LOVE is a visual romance that takes place on an intimate and awesome scale, exploring how their shared passion enabled pioneering research in the 1970s and 80s that helped save lives, but ultimately ended their own. This lyrical archival collage pulls from hundreds of hours of rare and unseen footage and photographs shot by the Kraffts, channeling the humour, affection, and insatiable curiosity that was integral to their partnership, and that left behind a legacy that will forever enrich our understanding of the natural world.

Eva can't stand the fact that her mother wants to renovate the house and get rid of the cat, which, disoriented since Eva's parents' divorce, pees everywhere. Eva wants to go and live with her father, who, disoriented like the cat, is experiencing second adolescence. But like someone who traverses an ocean of adults without knowing how to swim, Eva has to face the rage that gnaws at her father. And now it is going through her too.

After finishing a job on a Texas oil rig, John returns to his hometown in Mississippi, where he will confront not only his repressed trauma but that of a society grieving dying American myths.

On the French Polynesian island of Tahiti, the High Commissioner of the Republic and French government official is a calculating man with flawless manners. His somewhat broad perception of his role brings him to navigate the high-end "establishment" as well as shady venues where he mingles with the locals — especially since a persistent rumour has been going around about the sighting of a submarine whose ghostly presence could herald the return of French nuclear testing.

During a silent divorce, Isabel leaves the city with her two children for her family's abandoned country house. She soon discovers that her housekeeper's sister, María, has gone missing. When Isabel offers to help, an unspoken pact to find María is born between the two women. Meanwhile, Roberta, the commander in charge of the police investigation, tries to extract her son from the cartels. The countryside is mined with confusion and danger but, regardless of these circumstances, determination persists in the face of destiny.

Bolivia, today. After walking for a week, Elder and his miner companions arrive in La Paz to demand the reinstatement of their jobs. Suddenly, Elder starts to feel unwell... With the help of the elderly Mamá Pancha, Elder and his friends find work in the market. But Elder’s condition worsens: he’s choking and struggling for breath. Mamá Pancha sends him to Max – a witch doctor, hermit, and clown – who may be able to bring the young man back to life.

WAR PONY follows the interlocking stories of two young Oglala Lakota men growing up on the Pine Ridge Reservation. At twenty-three, Bill just wants to make something of himself. Whether it’s delivering goods or breeding poodles, he is determined to hustle his way to the American Dream. Meanwhile, twelve-year-old Matho can’t wait to become a man and is desperate for approval from his young father. When a series of impulsive decisions turns Matho’s life upside down, he finds himself unequipped to deal with the harsh realities of the adult world. Bound by their shared search for belonging, they grapple with identity, family, and loss, as they navigate their unique paths to manhood.

A film shoot will take place at the cité Picasso, in the suburbs of Boulogne-sur-Mer, in the north of France. During the casting, four teenagers, Lily, Ryan, Maylis, and Jessy are chosen to appear in the film. Everyone in the neighbourhood is surprised: why only take the “worst ones"?

As the human species adapts to a synthetic environment, the body undergoes new transformations and mutations. With his partner, Caprice, Saul Tenser, a celebrity performance artist, publicly showcases the metamorphosis of his organs in avant-garde performances. Timlin, an investigator from the National Organ Registry, obsessively tracks their movements, which is when a mysterious group is revealed… Their mission: to use Saul’s notoriety to shed light on the next phase of human evolution.

When a couple splits, mould starts growing on their dumped mattress, from which a mysterious creature is born. The creature travels around the country, feasting on its victims’ vertebrae, struggling to break free from the bed, the mould, and its past. A film filled with deep longing and even deeper loneliness, THE FIFTH THORACIC VERTEBRA captures the wistfulness of young love lost and the monster of despair that emerges from that sense of abandonment.

Tinja, a twelve-year-old gymnast, is desperate to please her image-obsessed mother, whose popular blog "Lovely Everyday Life" presents their family’s existence as manicured suburban perfection. One day, after finding a wounded bird in the woods, Tinja brings its strange egg home, nestles it in her bed, and nurtures it until it hatches. The creature that emerges becomes her closest friend and a living nightmare, plunging Tinja beneath the impeccable veneer into a twisted reality that her mother refuses to see.

It should be the happiest time in Valeria’s life. She and her husband, Raul, have finally seen one of their long-time dreams come true: Valeria is pregnant. At first, everything seems perfect. Gradually, though, her mood darkens. With motherhood upon her, Valeria can’t shake off heavy self-doubt and a pervasive dread, the latter stemming from visions of spider-like presences and other possibly supernatural threats, all of which may be the work of an entity known as La Huesera. Hoping to confront these demons, she reconnects with the old, more carefree life she once gave up for Raul, including rekindling an old flame with her first love, Octavia.

After a devastating battle against a diabolical turtle, a team of five avengers – known as the Tobacco Force – is falling apart. They are sent on a mandatory week-long retreat to strengthen their decaying group cohesion. Their sojourn goes wonderfully well until Lézardin, Emperor of Evil, decides to annihilate planet Earth.

In a distant land, bears and unicorns have always been at war. A teddy bear army indoctrinates young recruits to wage war against the unicorns, who threaten the bears’ survival. Brothers Bluey and Tubby, along with a group of inexperienced recruits, are sent on a dangerous mission to save the magical forest. Are they up to the challenge? Half APOCALYPSE NOW, half BAMBI, UNICORN WARS is an antiwar, environmentalist fable.