NEVER LEAVE ME, the feature film of Bosnian and Herzegovinian director Aida Begić was shown in National Theatre in today's In Focus programme. 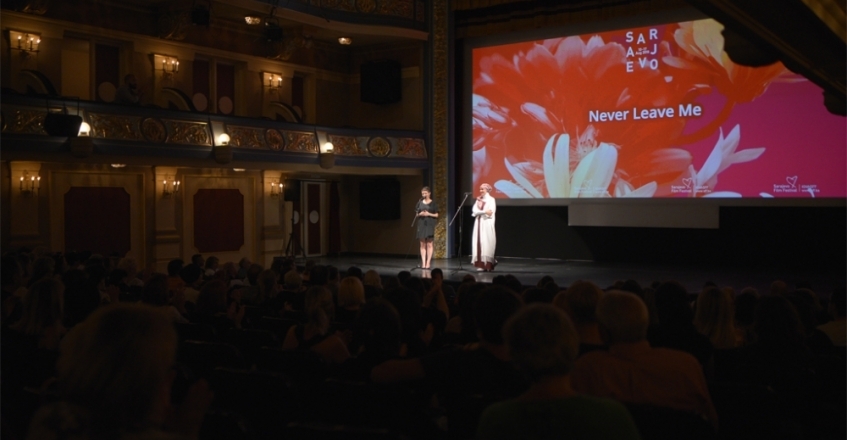 After his mother dies, 14-year-old Isa is sent to an orphanage for Syrian refugees in Şanlıurfa, Turkey. There, he begins an uneasy friendship with 11-year-old Ahmad and 10-year-old Motaz. Ahmad’s father disappeared in Syria, but he has never lost hope they will be rejoined one day. In the meantime, Ahmad dreams of becoming successful, so that his father will be proud of him. Motaz’s mother remarried and left him in the orphanage. He wants to enter a singing talent show, hoping she will notice and take him back. Although the three boys are very different in their temperament and desires, and are not particularly fond of each other, they find a common interest: they all want to leave the orphanage and start a new life. To obtain some money for their goal, the boys start selling paper tissues to visitors around the historic site of Balıklıgöl. At first things go very well for them, but soon their flourishing small business is threatened by Karaca, a local deadbeat whom Isa owes money. In face of adversity, the boys are forced to start relying on each other. The dangers that threaten to ruin their lives give them a reason to find love, friendship, and hope.
You can also watch the movie in one of the following showings.
Director: Aida Begić
Screenplay: Aida Begić
Director of Photography: Erol Zubčević
Editor: Redžinald Šimek
Sound: Igor Čamo
Costume Design: Sanja Džeba
Production Design: Mirna Ler
Producer: Aida Begić, Adis Đapo, Seyyid Muhammed Emin Elhüseyni
Production: Beşir Derneği, Film House Sarajevo
Contact: besir@besir.org.tr, info@filmhouse.ba
Cast: Isa Demlakhi, Ahmad Husrom, Motaz Faez Basha, Carole Abboud, Tuka Na’al, Mehmet Usta, Ossama Mahmud Himeli
Aida Begić
2017 – NE OSTAVLJAJ ME / NEVER LEAVE ME
2012 – DJECA / CHILDREN OF SARAJEVO
2008 – SNIJEG / SNOW
Film INFINITE FOOTBALL opened this year's In Focus programme
In Focus 2018
In Focus 2017
In Focus 2016
In Focus 2020.
In Focus: IVANA THE TERRIBLE
In Focus: YOU HAVE THE NIGHT
In Focus: THE WHISTLERS
In Focus: HALF - SISTER