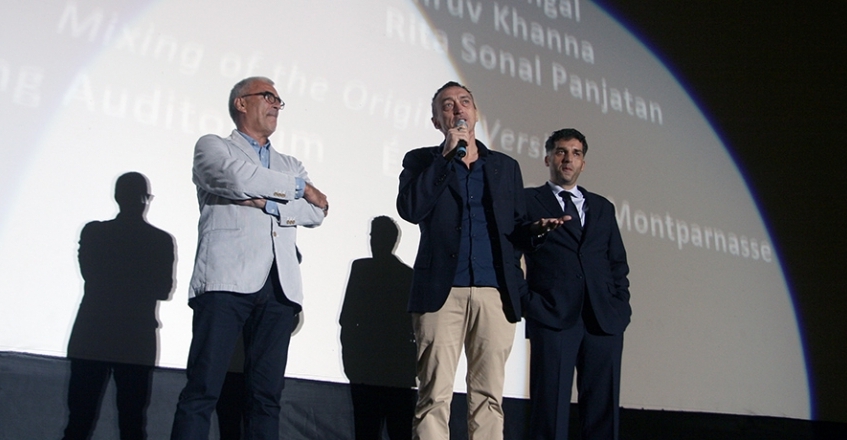 Film is a story about middle class housewife Ila who is trying once again to add some spice to her marriage, this time through her cooking. Unknowing to her is that the special lunchbox she prepared has been mistakenly delivered to miserable office worker Saajan, a lonely man on the verge of retirement. Curious about the lack of reaction from her husband, Ila puts a little note in the following day’s lunchbox, in the hopes of getting to the bottom of the mystery. This begins a series of lunchbox notes between Saajan and Ila, and the mere comfort of communicating with a stranger anonymously soon evolves into an unexpected friendship. They each discover a new sense of self and find an anchor to hold on to in the big city of Mumbai that so often crushes hopes and dreams. But still strangers physically, Ila and Saajan become lost in a virtual relationship that could jeopardize both their realities.

Ritesh Batra was born and raised in Mumbai, and he now lives between Mumbai and New York. Batra’s short films have been shown at many international film festivals and fine arts venues. His recent Arab language short CAFÉ REGULAR, CAIRO, screened at over 40 international film festivals and won 12 awards including the International Critics Prize (FIPRESCI) at Oberhausen, and Special Jury Mentions at Tribeca and Chicago. His feature script THE STORY OF RAM was part of the Sundance Screenwriters and Directors labs in 2009. THE LUNCHBOX is Ritesh Batra’s debut feature. Its world premiere was at the Critics Week at the 2013 Cannes Film Festival.