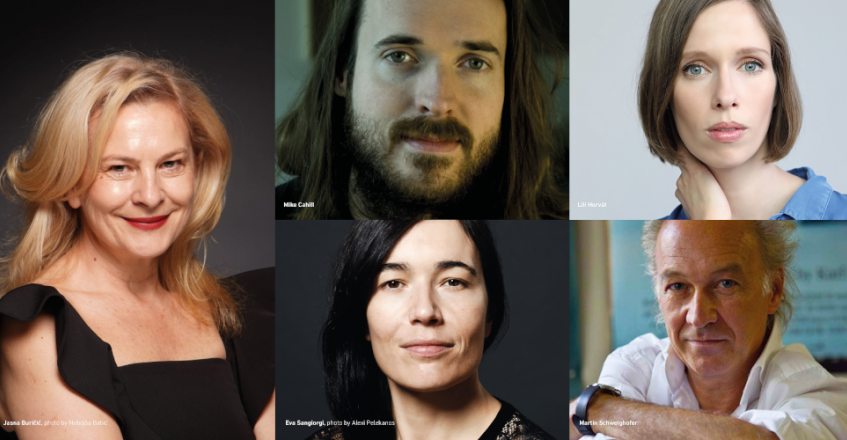 President of the Jury
Jasna Đuričić
Actress, Serbia
Jasna Đuričić was born on 16 April 1966 in Ruma, Serbia. She graduated acting from the Academy of Arts in Novi Sad, under Prof. Branko Pleša in 1989. From 1990 to 2005 she was a permanent member of the Serbian National Theatre in Novi Sad, where she was a drama actress. She teaches acting at the Academy of Arts in Novi Sad. Numerous theatre roles in Serbia and the region have brough her significant theatre awards, particularly including four Sterija Awards and a Golden Laurel Wreath at MESS. In 2014, she received a Ring of Dobrica, the highest award in Serbia for theatre actors and actresses for lifetime achievement. She also had a series of notable roles in film and television. For her role in film WHITE, WHITE WORLD by Oleg Novković, she received the Silver Leopard for Best Actress at Locarno Film Festival in 2010, and for the same role she also received the award for best actress at Les Arcs Film Festival. The leading role in QUO VADIS, AIDA? by Jasmila Žbanić, brought her the awards for best actress at the London Film Week and El Gouna Film Festival in Egypt.
Mike Cahill
Director and screenwriter, USA
Mike Cahill was born on 5 July 1979. As a director and screenwriter, he authored three feature films, ANOTHER EARTH (2011), I ORIGINS (2014), and BLISS (2021). He is the only filmmaker who has won the prestigious Sloan Prize at the Sundance Film Festival twice. In 2011, the National Board of Review included his first film among the ten best independent films. Cahill studied economics at the Georgetown University and he is a self-taught filmmaker. He started his film career as a camera operator, field producer, and editor for the National Geographic Television and Film. He was also an editor of two music documentaries, LEONARD COHEN I'M YOUR MAN (2005) and EVERYONE STARES THE POLICE INSIDE OUT (2006). He was the executive producer and directed pilot episodes for several television series, including MAGICIANS (2015) and THE PATH (2016). As a writer and director, Cahill is primarily focused on the overlap of science and spirituality. He is a father, husband, vegetarian, and tennis fan.
Lili Horvát
Director and screenwriter, Hungary
Lili Horvát was born in 1982 and she grew up in Budapest. She studied audio-visual arts at the Sorbonne Nouvelle in Paris and film directing at the University of Theatre and Film Arts in Budapest. Her first feature film WEDNESDAY CHILD was awarded in the competition programme East of the West at the festival in Karlovy Vary in 2015. Recognitions from around the world followed. In 2016, Lili Horvát co-founded the production company Poste Restante, which produced her second feature film PREPARATIONS TO BE TOGETHER FOR AN UNKNOWN PERIOD OF TIME. The film premiered at the Venice International Film Festival in 2020. The film has also been presented at Toronto and Busan among many other festivals, and won major awards worldwide. It has been nominated for the Independent Spirit Award.
Eva Sangiorgi
Artistic Director of Viennale - International Film Festival in Vienna, Austria
Eva Sangiorgi is a writer and film programmer who lives and works in Vienna. She has collaborated with different festivals in Latin America, and in Mexico City she founded FICUNAM, a festival she ran until 2018. She has also been involved in film distribution and worked in film and television production. In Mexico, she launched and coordinated several publications on contemporary cinema for the National Autonomous University of Mexico (UNAM). Currently, she is the artistic director of Viennale, International Film Festival in Vienna.
Martin Schweighofer
Executive Director of AFC – Austrian Film Commission, Austria
Martin Schweughofer studied journalism and art history at the University of Vienna. He worked as a film critic and art editor in different periodicals in Austria until 1993. Since 1993 he has been the Executive Director of AFC – Austrian Films. He is a founder and Director of the Diagonale, Festival of Austrian Film. He is one of the founders of the Pan-European organisation, European Film Promotion (EFP) established in Hamburg, where he was first the President, and from 2013 to 2019 he was the President of Organisation. He is a co-founder and drama consultant of the theatre company Theater im Kopf. He was a jury member at different international film festivals, including Buenos Aires, Copenhagen, Dubai, Sydney, Thessaloniki, Trieste, Wroclaw, Yerevan, and Zagreb. He lives in Vienna.
The 27th Sarajevo Film Festival will take place 13-20 August 2021.
27th Sarajevo Film Festival Awards
27th Sarajevo Film Festival Partners' Awards
Award Ceremony tonight in National Theatre
Introducing Sarajevo Film Festival’s Special Award for Promoting Gender Equality
Jury of the Competition Programme – Feature Film of the 27th Sarajevo Film Festival