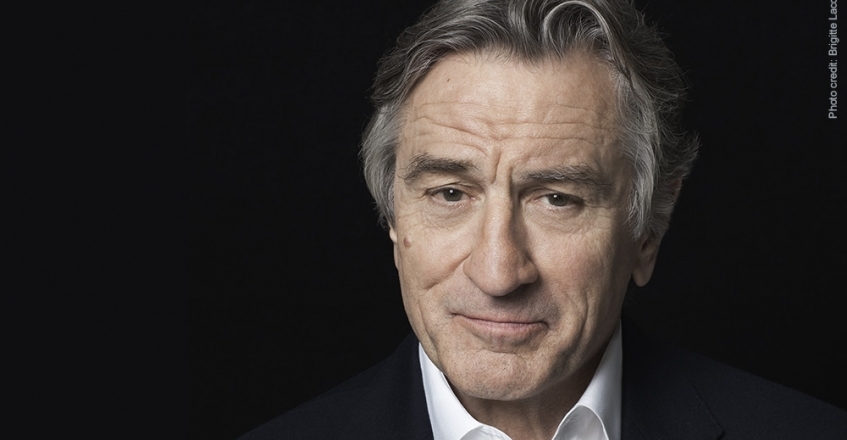 De Niro will present the iconic “Taxi Driver” at the Opening of 22nd edition of the Sarajevo Film Festival.

Preeminent Actor, director and producer Robert De Niro, two-time Academy Award® winner, five-time Academy Award® nominee and Golden Globe® winner, will receive the first Honorary Heart of Sarajevo - Lifetime Achievement Award for his extraordinary contribution to the art of film at Opening Night of the 22nd edition of Sarajevo Film Festival taking place from the 12th to the 20th of August.

"We are honored to have Robert De Niro as the first recipient of the Honorary Heart of Sarajevo – Lifetime Achievement Award," said Mirsad Purivatra, Director of the Sarajevo Film Festival. “Ever since we met ten years ago at the Tribeca Film Festival, we were hopeful that Robert De Niro would be able to come to Sarajevo. That day has come and as a film professional and a great lover of film, I am sure that when I say this, I am speaking for both the audience and film professionals too - we are truly excited!”.

In honor of its 40th Anniversary, De Niro will present Martin Scorsese’s restored “Taxi Driver,” in which he starred. The film will be screened as part of the prestigious Open Air Program, the festival’s largest screening venue, where De Niro will also receive the Honorary Heart of Sarajevo in front of an audience of 3,000 film enthusiasts. “Taxi Driver” is regularly cited by critics, film directors, and audiences alike as one of the greatest films of all time. Nominated for four Academy Awards®, including Best Picture, and Best actor for De Niro, it won the Palme d'Or at the 1976 Cannes Film Festival and two Golden Globe® Awards. Along with “Taxi Driver,” De Niro and Scorsese made eight movies together: "Mean Streets” (1973), "New York, New York" (1977), "Raging Bull" (1980), "The King of Comedy" (1983), "Goodfellas" (1990), "Cape Fear" (1991) and "Casino" (1995).

The acclaimed actor will also hold a talk about his career “In Conversation” for the festival audience and press at the Festival’s flagship National Theatre in Sarajevo moderated by Mike Goodridge, former journalist and CEO of London-based Protagonist Pictures who also programs the Kinescope section of the festival.

De Niro is currently in post-production on “The Comedian” with director Taylor Hackford and HBO’s “Wizard of Lies,” in which he is starring as Bernie Madoff and is executive producer. He will next be seen in The Weinstein Company’s boxing film “Hands of Stone” and Grindhouse Entertainment’s “Bus 657.”

Previous recipients of the Sarajevo Film Festival’s Heart of Sarajevo Award include Angelina Jolie, Benicio Del Toro, Gael Garcia Bernal, Steve Buscemi and acclaimed international award-winning directors Atom Egoyan, Jafar Panahi, Mike Leigh, Béla Tarr and Danis Tanović, amongst others. The Heart of Sarajevo Award was designed by French designer and filmmaker agnès b who is also a patron of the festival.

Robert De Niro launched his prolific motion picture career in Brian De Palma's “The Wedding Party” in 1969. By 1974 he had won the New York Film Critics Award for Best Supporting Actor in recognition of his critically acclaimed performance in “Bang the Drum Slowly” and from the National Society of Film Critic for Martin Scorsese's “Mean Streets.”

In 1974 De Niro won the Academy Award for Best Supporting Actor for his portrayal of the young Vito Corleone in “The Godfather, Part II.” In 1980 he won his second Oscar, as Best Actor, for his extraordinary portrayal of Jake La Motta in Scorsese's “Raging Bull.”

De Niro has earned Academy Award nominations for his work in five additional films: as Travis Bickle in Scorsese's acclaimed “Taxi Driver;” as a Vietnam vet in Michael Cimino's “The Deer Hunter,” as a catatonic patient brought to life in Penny Marshall's “Awakenings,” in 1992 as Max Cady, an ex-con looking for revenge, in Scorsese's remake of the 1962 classic “Cape Fear” and as a father to a bi-polar son in David O. Russell’s “Silver Linings Playbook.”

De Niro was honored with the Cecil B. DeMille Award at the 2011 Golden Globe Awards. He also served as the jury president of the 64th Cannes Film Festival.

He is currently in post-production on “The Comedian” with director Taylor Hackford and HBO’s “Wizard of Lies,” in which he is starring as Bernie Madoff and is executive producer. He will next be seen in the boxing film “Hands of Stone” from The Weinstein Company and Grindhouse Entertainment’s “Bus 657.”

De Niro takes pride in the development of his production company, Tribeca Productions, the Tribeca Film Center, which he founded with Jane Rosenthal in 1988, and in the Tribeca Film Festival, which he founded with Rosenthal and Craig Hatkoff in 2001 as a response to the attacks on the World Trade Center. The festival was conceived to foster the economic and cultural revitalization of Lower Manhattan through an annual celebration of film, music, and culture; the festival’s mission is to promote New York City as a major filmmaking center and help filmmakers reach the broadest possible audiences.

Through Tribeca Productions, De Niro develops projects on which he serves in a combination of capacities, including producer, director and actor.

Tribeca's “A Bronx Tale” in 1993 marked De Niro’s directorial debut. He later directed and co-starred in “The Good Shepherd” with Matt Damon and Angelina Jolie.

Other Tribeca features include “Thunderheart,” “Cape Fear,” “Mistress,” “Night and the City,” “The Night We Never Met,” “Faithful,” “Panther,” “Marvin's Room,” “Wag the Dog,” “Analyze This,” “Flawless,” “ The Adventures of Rocky and Bullwinkle,” “Meet the Parents,” “Fifteen Minutes,” “Showtime,” “Analyze That” and “Meet the Fockers.”

In 1992, Tribeca TV was launched with the acclaimed series “Tribeca.” De Niro was one of the executive producers.

Tribeca Productions is headquartered at De Niro's Tribeca Film Center in the TriBeCa district of New York. The Film Center is a state-of-the-art office building designed for the film and television industry. The facility features office space, a screening room, banquet hall and restaurant. The center offers a full range of services for entertainment professionals.