In 2016, Sarajevo Film Festival launched a new program called DEALING WITH THE PAST with the aim of encouraging dialogue in the countries created by the collapse of the former Yugoslavia, which are still struggling with the long-term and profound consequences of wars 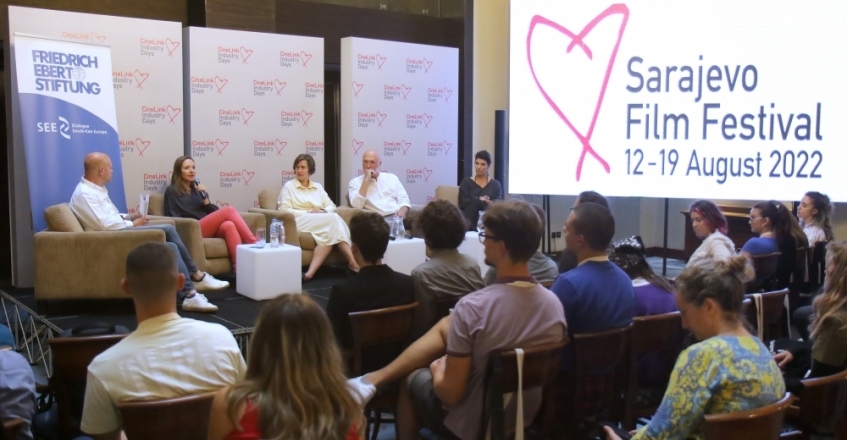 This program presents a polyphony of author's voices questioning painful events from the recent past, while reaching for different artistic forms and dealing with a multitude of diverse topics, in order to confront viewers with the issues of unsolved war crimes and the fact that even though the war may have stopped, the consequences are very much present and vivid.

In the past, the program has hosted numerous celebrated authors such as Joshua Oppenheimer, Ron Haviv, Ognjen Glavonić, Mila Turajlić, Lars Kraume, Nebojša Slijepčević, Anja Kofmel and others.

In addition to the film program, Festival launched the TRUE STORIES MARKET, a unique event that connects filmmakers with organizations that research and document events in the former Yugoslavia from recent wars.

During the previous edition of the TRUE STORIES MARKET four stories were presented, and in order to further help transfer the presented stories to the big screen, the Sarajevo Film Festival announces a public call for filmmakers interested in making films based on them. The award is in the amount of 10.000,00 € and is presented by Friedrich Ebert Stiftung Southeast Europe Dialogue.

We invite filmmakers and production companies from Southeastern Europe to send their applications directly with proposals for filming a feature-length feature or a feature-length documentary film inspired by one of the presented stories.

Filip Škiljan (42) and Milan Radanović (45) are historians from Zagreb. The remains of the Ustasha death camp are hidden in the hills of Velebit. Filip and Milan are trying to find these remains, once and for all, while Ivo Goldstein (64) reads a letter that arrived to the recipient (his father) 64 years later. The film “Depths of Velebit” deals with the fate of the victims of fascism and the continuous “culture of forgetting” and erasure from the collective memory of everything that was once a place of union, that is, anti-fascism, which, at its core value, aimed to unite differences. Today these differences are reason for new killing grounds.

The story of Dženita Mulabdić is the story of 30 years of impunity for the crimes of paramilitary units in Bijeljina. Mulabdić watched with her own eyes the brutal crimes of the Serbian Volunteer Guard, called Akranovci, in Bijeljina. Those crimes marked the beginning of the war in Bosnia and Herzegovina in which 100,000 people were killed. Her husband was killed before her eyes, and she also saw some of the other murders. Today, the street where she watched those crimes is named “The Street of Serbian Voluntary Guard”. She testified about her experiences to the investigators, but no one was ever convicted of her husband’s murder. “It hurts me that no one ever answered for this crime”, is her message.

Ešef Džananović survived concentration camps “Keraterm”, “Trnopolje” and “Omarska” - he witnessed murders and beatings. In the camp he learned that his family had been killed. He lost five family mem- bers, sons Alen and Ajdin aged four and nine, a sister aged 17, his wife aged 32 and his mother. Today, he is fighting for the truth and for building a monument to the murdered children. The authorities of the city of Prijedor prevent him. “I am most sorry that my neighbors all the way to Prijedor know about my family, my sons, they all know who killed them, where they are hidden, but unfortunately I did not find the remains”, is his message.

A HERO FROM THE ARENA

For those whose loved ones were killed or disappeared during the Second World War in Yugoslavia, war wounds did not stop in 1945. In that less visible war after the war, in the struggle to find the missing and reunite families, Marino Zurli, a discreet hero of great deeds, also participated. This Croatian writer and journalist of Arena has been publishing stories and photos about the missing for ten years, putting together separated families, finding lost people and restoring joy to the hearts of those who believed that their loved ones will never appear again. In his lifetime, Marino Zurli managed to connect 150 family. This is a story about him.

This project is supported by the Friedrich Ebert Stiftung Southeast Europe Dialogue.

The deadline for submitting applications is November 25th, 2022.

Selected production companies and/or film authors will participate with the registered projects in an intensive program of elaboration and additional development of the project that will be organized in Sarajevo, and then they will have the opportunity to present their projects to potential financiers, producers and/or co-producers within CineLink of the days of the film industry of the Sarajevo Film Festival. The films that are shot at the end of this process will be shown in the program of the Sarajevo Film Festival.

In order to apply you need to deliver an concept note, motivation letter, biography and filmography. All the materials have to be sent on the following e-mail address dwp@sff.ba.

All stories were presented during the 28th Sarajevo Film Festival, and in addition to a short synopsis and information about the organization that is the source of the story, you can also watch the corresponding pitch presentations, on the above links.