The festival closed on August 20th with the world premiere of Dragan Bjelogrlić's film TOMA, which was screened in the Open Air program. The film was shown in Open Air locations of Sarajevo Film Festival. 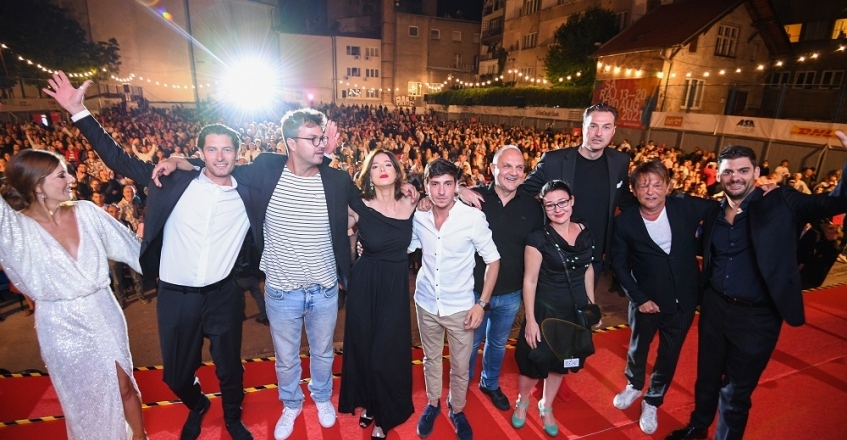 TOMA is an impressionist film about the life of Toma Zdravkovic, from childhood to stardom, tracing the loves that inspired him to compose some of this greatest hits and his many friendships with people from the art world of the former Yugoslavia. Along with Toma’s life, the film traces the lives of many well known artists from that period:  Zoran Radmilović, Mika Antić, Tozovac and others. TOMA is a biopic about Toma Zdravkovic, the man not only remembered for his songs but also for his bohemian lifestyle and soul. The film has two interlocking story lines. In one, set in 1991, we follow the story of patient-doctor relationship between Toma and his physician turning into a friendship. In the other, we follow Toma’s life, from his childhood in Pecenjevci, to his encounter with Silvana Armenulic which had a profound impact on his professional and personal life, helping him sour to the unimaginable heights of popularity, but also fall to the bottom of life. This is the story of a soul.
Director: Dragan Bjelogrlić
Cast: Milan Marić, Tamara Dragičević, Petar Benčina, Andrija Kuzmanović, Sanja Marković, Paulina Manov, Milan Kolak, Mirjana Karanović
On the eve of the opening of the 28th Sarajevo Film Festival, the Coca-Cola Open Air Cinema was fully booked during the pre-festival screening
The largest film screen in the region was set at the Coca-Cola Open Air Cinema
Jesse Eisenberg to receive Honorary Heart of Sarajevo Award at the 28th Sarajevo Film Festival
Introducing the Open Air Programme, online ticket sales starts today
Mads Mikkelsen is coming to the 28th Sarajevo Film Festival