Secrets are products of insecurity and fear

Interview with Jacqueline Lentzou, director of the film „Moon, 66 questions“ 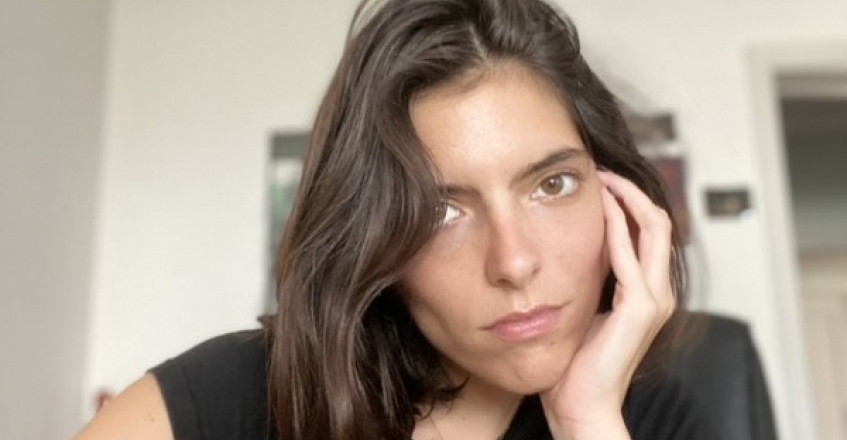 While watching your movie, I constantly had the need to rewind it. It has a lot of small details, unusual angles and burst lines that are difficult to grasp at first glance. This is not possible in the cinema. Do you think it is enough to watch this movie just once?
It is hard to provide an answer, as to me, this film is a film which i know like the palm of my hand. I made this film with the logic of non-logic. I mean yes there was structure, yet I wanted it to have the structure of a love letter. I think the amount of times you have the need of rereading a love letter, has to do with how much involved you have been with the sender.
We often see the moon and there are a lot of questions, the answers are sought in terrestrial and extraterrestrial aids – in tarot cards, astrological constellations, memories, feelings, car compartments... and most often, following visible and invisible signs, life itself answers. Did the unusual title „Moon, 66 Questions“ seek clarification in the form of the subtitle/description „A film about love, movement, flow (and lack of them)“?
The subtitile was invented during editing, i did not have it in my mind beforehand. I wanted it to be in the audience's head and to read every scene, possibly, with the subtitle in mind. There are scenes were 'nothing' big happens. Like in multiple life-moments. Seemingly nothing happens, no matter how hard one's heart may be pounding. With ('and lack of them') I felt safer, and I felt the film's tone is set from the beginning – something like: you are going to watch something hard, but there is always humor, because absurd rules.
The main roles are very demanding, both mentally and physically, because they require that the actors use words the least and much more all other means of expression – gaze, movement, facial expression... The actors are really fantastic. How hard was it to get such powerful acting creations from them and how much did Sofia Kokkali and Lazaros Georgakopoulos deserve credits for an enviable overall artistic impression?

It was a big risk for me, for a debut feature, for everything! And I am happy that it all worked out. It was easier with Sofia, given that we had worked together before, plus we are really good friends. So, in a way we were working when we were not officially working. There is a lacanian, or better, a general psychoanalytic touch to this 'the work is being done when you think you are not working'. With Lazaros, I had to be very very careful. His own very qualities – he is very sensitive and soft in therms of his energy, adoring his only daughter. So, the psychological part was already there. The movement part needed research, and I am more than grateful to have collaborated with Vicky Panagiotaki, the only Alexander-technique teacher, that enabled Lazaros to consciously lose or gain control of particular muscles. So he was not pretending not to be able to stand – he was literally unable to stand. It was scary sometimes during lunch break – sometimes, he would still be in 'sick mode' and he would joke 'imagine if i stay like this'. Strange.
You skillfully avoided revealing a secret that poisoned and marked the life of one family. Did you want to say that things that change us do not have to be said to make radical changes in our lives, or did you decide for some other reason that the secret should remain a secret?
If you, as a part of an audience, knows the secret, how did I keep the secret a secret?
I am myself a victim of family histories full of secrets, and I can openly admit that I hate them. They are products of insecutiy and fear, and they are part of the repetition of totally toxic, vicious cycles.
How healthy is it and how important is it to accept and forgive?
They are very different notions – somehow forgiving is more dynamic, it asks you to make space inside you and ideally 'hug' the source of pain. Acceptance is, to me, a greater process. It is more 'Godly' rather humane. There is no judgement or estimation of any kind. It is like seeing. You wake up and you see a crack on the ceiling.
Both are intrisinc to a good health. Especially self-acceptance, and self-forgiveness – which is a rather complicated topic, involving a lot of guilt. In the film, had the father accepted himself, for sure, he would not have been so terribly sick. Because if you do not accept, forgive, love your very self, at some point your very self will attack, because this would be its 'duty'.
Marinela Domančić
The world premiere of THINGS WORTH WEEPING FOR closed the Competition Programme - Feature Film
Regional premiere of GREAT FREEDOM
More choices, less stability
Concept of love and freedom
Regional premiere of CELTS