Chaired by Iranian director and writer Asghar Farhadi, one of the most prominent contemporary filmmakers whose accolades include two Oscars, the Jury of the Competition Programme - Feature Film of the 24th Sarajevo Film Festival will bring together internationally renowned filmmakers and artists from Iran, United Kingdom, Croatia, France and Georgia. 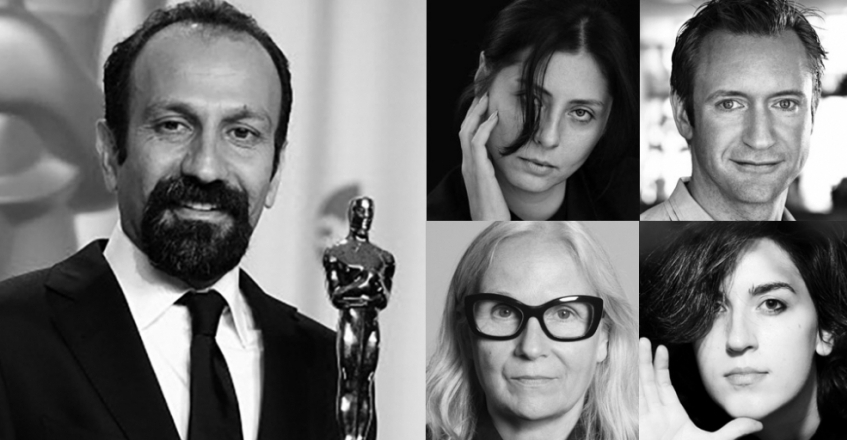 The Jury will announce the winners of the Heart of Sarajevo awards at the Awards ceremony on August 16.

The Sarajevo Film Festival is proud to announce the members of the Jury of the Competition Programme - Feature Film:

President of the Jury
ASGHAR FARHADI
Director/Writer (Iran)
Asghar Farhadi was born in 1972. In 2002, he wrote and directed his first feature film, DANCING IN THE DUST, which won the Best Actor award and the Russian Society of Film Critics’ Best Film award at the 25th Moscow International Film Festival, as well as the Best Director and the Best Screenplay awards at the 48th Asian Pacific Film Festival. A year later, Farhadi wrote and directed BEAUTIFUL CITY (2003). Farhadi subsequently directed FIREWORKS WEDNESDAY (2005), followed by ABOUT ELLY (2007) which simultaneously premiered at the Berlin International Film Festival and Fajr Film Festival in Teheran winning the Silver Bear for Best Director and the Crystal Simorgh for Best Directing respectively.

Farhadi then started to write A SEPARATION, which he shot in 2010. It premiered at the 2010 Berlin Film Festival where it picked up the Golden Bear for best film, as well as two Silver Bears, one each for its ensemble of actresses and actors. After it premiered at Berlinale, the film won more than 70 prizes across the globe, including the Golden Globe for Best Foreign Language Film, the Cesar for Best Foreign Film and the Academy Award for Best Foreign Language Film. A SEPARATION was an international success unprecedented by any Iranian film. The film was released in the United States in December 2011, becoming one of the highest grossing foreign language films in the difficult US marketplace. The same year, Farhadi was named on of Time magazine’s 100 most influential people in the world.

While A SEPARATION was being screened in different festivals and countries, Farhadi and his family moved to Paris so he could start work on the screenplay of THE PAST, his first film on a foreign language. THE PAST was released during the 2013 Cannes Film Festival, won the Best Actress Award (Bérénice Bejo) at the Cannes and was nominated for the Golden Globes and the César.

Farhadi returned to Iran in 2015 to shoot THE SALESMAN, which was screened in competition at the Cannes Film Festival where Farhadi won the Best Screenplay award, while the lead actor Shahab Hosseini picked up the Best Actor award. For this film, Farhadi won his second Oscar for Best Film in a Foreign Language.

Several months later, Farhadi started shooting his latest film, EVERYBODY KNOWS, in Spanish language, for which Penelope Cruz and Javier Bardem were reunited on screen. The film opened the 71st Cannes Film Festival and was in competition for the festival’s top prize.

JUDITA FRANKOVIĆ BRDAR
Actress (Croatia)
Judita Franković Brdar is a Zagreb-born actress. Her acting career was launched with a role in Vlatka Vorkapić's and Zoran Ferić's 2005 TV series WHEN DOES IT RING? (KAD ZVONI?). Judita continued her successful cooperation with Vorkapić, appearing in Vorkapić's theater play JUDITH FRENCH and her film SONJA AND THE BULL. Judita's favorite screen appearances include roles in films MOTHER OF ASPHALT (her first film role) and DADDY by Croatian director Dalibor Matanić, as well as the main role in Croatian TV series REST IN PEACE which was broadcast in the United States as part of the Walter Presents project. Judita holds a Masters Degree in comparative literature and Croatian language from the Faculty of Philosophy of the Zagreb University. Her training included studying Michael Cehov’s, Lee Strasberg’s and Jerzy Grotowski’s acting techniques. In order to perfect her acting skills, Judita regularly attends acting workshops. Her so far favorite completed acting training includes workshops based on techniques developed by Lessac, Akram Khan and Pina Bausch, participation in the SFF Talent Campus and the intense Meisner technique summer training program at Wiliam Esper Studio in New York which she completed in 2016.

He is also an independent film producer with several projects in development through his new company Groovy Pictures. He was formerly chief executive officer of UK-based production, finance and sales company Protagonist Pictures and under his aegis it delivered such hit films as LOVE & FRIENDSHIP, THE FLORIDA PROJECT, THE LOBSTER, HUNT FOR THE WILDERPEOPLE, ’71, CALVARY, THE RIDER, LADY MACBETH, GOD’S OWN COUNTRY and MAGGIE’S PLAN. Among the films he has executive produced are Andrea Arnold’s AMERICAN HONEY, THE DISCOVERY starring Rooney Mara and Robert Redford, MY OLD LADY with Maggie Smith and Kevin Kline and Oren Moverman’s THE DINNER. Goodridge took the reins at Protagonist in 2012 after 22 years as a film business journalist and film critic. He worked in senior editorial positions at Screen International for 19 years including 12 years as US editor in Los Angeles and three years as editor in London. He also worked as a programmer for the international Kinoscope section of the Sarajevo Film Festival from 2012 to 2017. He has written several books on cinema including two on film directors, and is a member of BAFTA and the European Film Academy.

BRIGITTE LACOMBE
Photographer (France)
Brigitte Lacombe is one of the most successful portrait photographers in the world, and is known for her influential and revelatory portraiture. For the past four decades, she has created iconic and intimate photographs of our most celebrated artists, actors, politicians and intellectuals. Lacombe has been a contributor to Vanity Fair, GQ, The New Yorker, Harper’s Bazaar, Conde Nast Traveler, The Wall Street Journal Magazine, The New York Times Magazine, The Financial Times Magazine, “M” Le Monde, Zeit Magazine, among many others. Her work has been exhibited by PHILLIPS Galleries in New York, Paris, and London, the Shanghai Center of Photography in China, Sotheby’s Galleries in London, and Qatar Museums in Doha. She has photographed advertising campaigns for Dior, Prada, Rolex, Armani, Hermes, and Lancome. Lacombe has worked as a special photographer on the film-sets of many directors including Martin Scorsese, Spike Jonze, Bennett Miller, Lynne Ramsay, Anthony Minghella, Mike Nichols, Sam Mendes, Alejandro González Iñárritu, Sofia Coppola, Quentin Tarantino, and Michael Haneke. She is often asked to photograph major theater productions. In 1985, Lacombe became the first and only staff photographer for Lincoln Center Theater in NY for 7 years. Two monographs of Lacombe’s work have been published: “Lacombe anima | persona”, published by Steidl/Dangin 2008, and "Lacombe cinema | theater", published by Schirmer/Mosel 2001. She is currently at work on her third book, a visual memoir. Lacombe received The Eisenstaedt Award for Travel Photography in 2000, The Lifetime Achievement Award from The Art Directors Club Hall of Fame in 2010, The Lucie Award for Lifetime Achievement in Travel & Portraiture in 2012. She lives in New York City.