This year, the Summer Screen Programme brings a number of interesting film titles produced all around the world over the past twelve months. We selected six exceptional music movies from the rich new offer of world cinema. 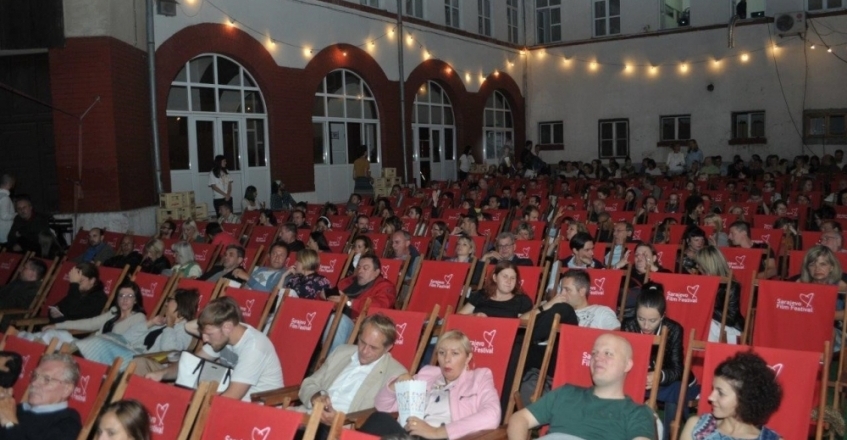 Please join us on what we hope will be an enjoyable trip through films and music that will take us from Mexico to America, from the United Kingdom to North Korea and back, and from Japan to Germany.

Active in the music business since the 1990s, Ricardo Villalobos, Sonja Moonear, Ata, Move D and Roman Flügel have a broad horizon of experience from which they speak about themselves, their subculture and its development.

Under the loving but firm guidance of an old fan-turned-director and cultural diplomat, and to the surprise of a whole world, the former Yugoslavian cult band Laibach becomes the first foreign rock group ever to perform in the fortress state of North Korea. Confronting strict ideology and cultural differences, they struggle to get the band's songs through the needle’s eye of censorship before they can be unleashed on an audience that has never before been exposed to alternative rock’n’roll. Meanwhile, loudspeakers are being set up to blare propaganda at the border between the two Koreas, and a countdown to war is announced. The hills are alive… with the sound of music.

In the summer of 2015, Ellie Rowsell, Joff Oddie, Joel Amey and Theo Ellis take their band Wolf Alice (which was named after a short story by Angela Carter) on tour through Great Britain and Ireland, to promote their seductive, darkly euphoric debut album 'My Love is Cool' – and find themselves confronted by sudden fame. Director Michael Winterbottom accompanies the band and observes the realities of life on tour from the perspective of a new member of the crew: from the energetic interplay between the band and its young audience and the moments of ecstasy on stage, to the exhaustion backstage. In time, the relationships between the travellers are also brought to light – with a few surprising turns.

Patricia Dombrowski (a.k.a. “Killa P”, a.k.a. "Patti Cake$") drafts rhymes while serving drinks at a dingy New Jersey dive bar, at the same time trying to pay off her coarse but beloved nana’s medical bills and support her hard-drinking mother, whose own musical aspirations faded long ago. Patti and her rap partner and best friend Jheri share dreams of fame, fortune and escaping Dirty Jersey for good, but they have yet to find a producer with the "fire beats" they need. Undaunted by the taunts of local goons, Patti unexpectedly gravitates to a reclusive death-metal musician named Basterd Antichrist, a newcomer who just might be able to help her achieve hip-hop superstardom.

“Idols” has fast become a phenomenon in Japan, as girl bands and pop music permeate Japanese life. The eye-opening TOKYO IDOLS gets at the heart of a cultural phenomenon driven by an obsession with young female sexuality and Internet popularity. This ever-growing phenomenon is examined via Rio, a bona fide Tokyo Idol, who takes us along on her journey towards fame. Now meet her “brothers”: a group of middle-aged male super-fans who devote their lives to following her – both in real life and in the virtual world. Once considered to be on the fringes of society, these "brothers", who gave up salaried jobs to pursue their interest in female idol culture, have since become mainstream via the Internet, highlighting the growing disconnect between men and women in hypermodern societies.