This year's recipient of the Katrin Cartlidge Foundation Bursary is Ran Huang. A Chinese artist and film director, his film The Administration of Glory, was in competition at Cannes 2014 for the Short Film Palme d'Or. 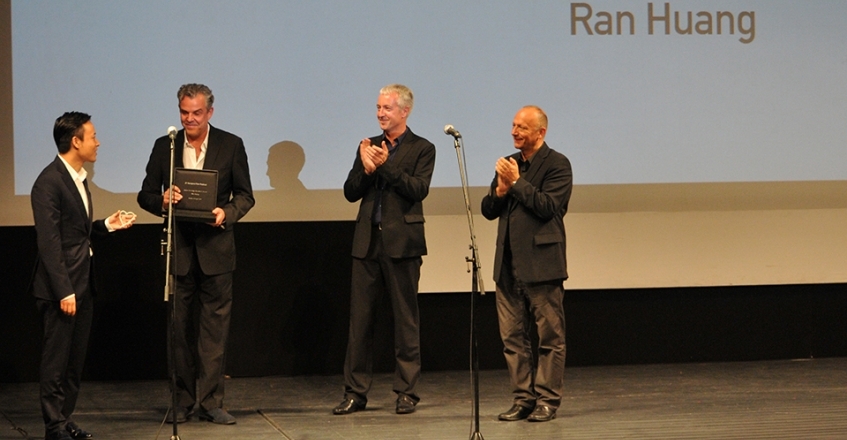 Ran's work caught the interest of award winning actor and director Danny Huston, who is the Curator for the Katrin Cartlidge Foundation 2015.

Danny Huston said: «When I saw Ran's films I knew I was watching the work of a visionary: he makes me see the world differently and I find that very exciting. Sarajevo Film Festival is all about international communication through Art and Ran is investigating the human condition.»

Ran Huang is delighted at the possibilities offered by the Bursary: «As an artist you work largely on your own but in film I really enjoy the openness to others' ideas. I appreciate this opportunity to expand my vision, to explore a new language, a new community and a new way to connect with people.»

Motivated by the late actress Katrin Cartlidge’s inspiring presence, the Katrin Cartlidge Foundation exists to identify and support new voices and new perspectives in cinema. The Bursary is always awarded at Sarajevo Film Festival, in honour of Katrin's close association with the area and with the founding principles of the Festival.

He graduated from Birmingham Institute of Art and Design with a First Class BA (Hons) Fine Art degree and gained his MFA Fine Art degree at Goldsmiths College, London. Huang now lives and works in Beijing. Huang is the first representative from China since 1965 to be shortlisted for the esteemed Short Film Palme d'Or and was the sole representative from China to participate in the competition in 2014.

As an artist, he is represented by Long March Space (Beijing) and Simon Lee Gallery (London, Hong Kong). He has participated in numerous international exhibitions at leading institutions including The Jewish Museum, NY (2014), Central Academy of Art, Beijing (2014), The Tampa Museum Of Art (2014), UCCA, Beijing (2013), Kino der Kunst, Munich (2012), the Contemporary Art Museum, Houston (2012) and Kunstmuseum, Bonn (2011) as well as international biennial and triennial exhibitions, including Rendez-vous 15 -  one of three major exhibitions on view as part of the upcoming 13th Biennale de Lyon.

Danny Huston is currently in post production as director and star of “The Last Photograph”, a film based on the novel by Simon Astaire.

Recent work in front of the camera includes Danis Tanovic's “Tigers”, showing in Open Air at this year's Sarajevo Film Festival, Marc Forster’s “All I See Is You”, “Monster”, directed by Bernard Rose, “Pressure”, directed by Ron Scalpello; and Tim Burton’s “Big Eyes”. Huston got his start directing “Mr. North” and gave a breakthrough acting performance in the independent film “Ivansxtc” for which he was nominated for Best Male Performance at the 2000 Independent Spirit Awards.

For the last ten years the Katrin Cartlidge Foundation has appointed a curator, selected from the eclectic friends and colleagues of both Katrin and the Foundation, who in turn chooses a recipient for the annual bursary. The recipient is a new cinematic voice whose work, in some way, embodies Katrin’s own integrity of spirit and commitment to independent film.

Recipients of the Foundation Bursary include directors Cary Fukanaga and Juanita Wilson, who both returned to Sarajevo Film Festival with their first feature films, Senegalese filmmaker Dyana Gaye, Syrian documentary film-makers, Orwa Nyrabia and Diana El Jeroudi, and the Cine Institute of Haiti.