Danny Huston Returns to the Sarajevo Film Festival as the Curator of the Katrin Cartlidge Foundation 2015. and to Present Danis Tanovic's "Tigers"

Award winning actor and director Danny Huston, known for his versatility and dramatic screen presence is the Curator for the Katrin Cartlidge Foundation 2015 and returns to Sarajevo to give this years Award. 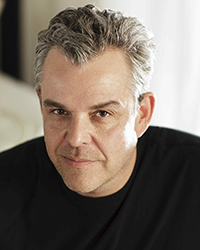 Danny will also present Danis Tanović’s “Tigers”, with the Director and Producers. The film will be screened within the Open Air Programme at the festival’s largest venue.

Huston is currently in post production on “The Last Photograph”, a film which he directs and stars, based on the novel by Simon Astaire.

His other recent work in front of the camera includes Marc Forster’s “All I See Is You”, “Monster”, directed by Bernard Rose, “Pressure”, directed by Ron Scalpello; and Tim Burton’s “Big Eyes”. Huston got his start directing “Mr. North” and gave a breakthrough acting performance in the independent film “Ivansxtc” for which he was nominated for Best Male Performance at the 2000 Independent Spirit Awards.

Since then his film acting work has included: “Libertador”, “The Congress”, “Hitchcock”, “Wrath of the Titans”, “The Aviator”, “The Constant Gardener”, “Children of Men”, “Marie Antoinette”, “Two Jacks”, “Boxing Day”, “Robin Hood”, “The Proposition”, “Birth”, “X-Men Origins: Wolverine”, “30 Days of Night”, “The Kingdom”, and many more.

Huston was nominated for a Golden Globe in 2013 for Best Performance by an Actor in a Supporting Role in a Series for his role in “Magic City” (STARZ). His other television acting work includes the hit television series “Masters Of Sex” (Showtime), the recurring role of Massimo Dolcefino in “American Horror Story” (FX), and performances in “You Don’t Know Jack” (HBO) and “John Adams” (HBO/Playtone).

Motivated by the late actress Katrin Cartlidge’s inspiring presence, the Foundation exists to identify and support new voices and new perspectives in cinema. For the last ten years the Foundation has appointed a curator, selected from the eclectic friends and colleagues of both Katrin and the Foundation, who in turn choose a recipient for the annual bursary. The recipient is a new cinematic voice whose work, in some way, embodies Katrin’s own integrity of spirit and commitment to independent film.

This years award will be presented by Danny Huston on August 21st at gala event at 21st Sarajevo Film Festival.