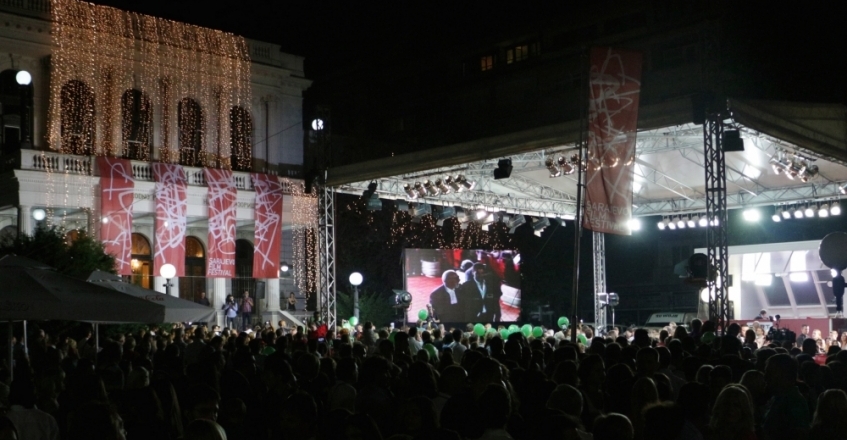 It is difficult to discuss regional film production without mentioning the state of the world cinema in general. When one looks at the way in which regional films are funded, produced and distributed, it is safe to say that the regional cinema is among those in Europe that face the greatest challenge when they reach the stage of distribution. There is no doubt that the potential film market is shrinking, that movie theaters are increasingly empty and that the space for art house film is slowly diminishing. Under such circumstances, film festivals become increasingly important. Festivals are not just a showcase of film, but also a space where filmgoers meet filmmakers, and appreciate such contact. The interactive nature of film festivals has never been as important as it is now. The Competition Programme of the Sarajevo Film Festival cherishes such intimate contact, which is not only important for the audiences, but can also be a very powerful and often a formative experience for filmmakers as well. That experience is the reason why filmmakers return and why they want to come to Sarajevo for the first time. Thus, when making a selection we always before anything else consider the films, but we also consider the needs of our audience because it is a very important part of the Sarajevo Film Festival.

In the process of selecting films for this year’s Competition Programme we have seen 196 features from 20 countries that are in the focus of this part of the festival. The fact that as many as six feature films from our region have been screened at the Cannes Film Festival this year is the best proof that our region has something to offer in terms of artistic and creative production. Debut features dominate the Competition Programme this year, as six out of the ten selected films that will compete for the Heart of Sarajevo Award are their authors’ first features. The remaining three films were authored by directors who already competed in the Sarajevo Film Festival with their previous features, namely Dalibor Matanić from Croatia, Corneliu Porumboiu from Romania, and Karl Markovics from Austria, and the last but not the least is Athina Rachel Tsangari from Greece.

Matanić will present his THE HIGH SUN (ZVIZDAN), one of the titles screened at the Cannes where it received excellent reviews from the critics, a standing ovation from the audience and the Jury Prize of the Festival’s Un Certain Regard competition. The film offers a trio of love narratives in three different generations in the Balkans, each playing out inside the matrix of the Balkan inter-ethnic tensions and intolerance. It most strongly resembles a trio of Romeo and Juliet stories, but with an ending that leaves the door open for dialogue and maybe even a happy ending. Porumboiu’s THE TREASURE (COMOARA) received the Talent Award of the Un Certain Regard program at the Cannes. This humor-filled film reflects on the greed and consumerism pervading the contemporary society. The film’s main protagonist is helping his neighbor in his quest to find family treasure, but Porumboiu questions his good intentions as well as the very concept of hidden treasure with a dose of irony. The Heart of Sarajevo winner Karl Markovics returns to the Festival with his SUPERWORLD (SUPERWELT) that premiered in Berlin. The film focuses on an ordinary housewife whose routine life and the world around her are shaken after God starts speaking to her. Athina Rachel Tsangari's third feature CHEVALIER deals with the questions of control and the limits and nature of friendship, and after opening in Locarno Competition will be presented in our Competition as well.

In his first feature BACK HOME (ACASĂ LA TATA), Andrei Cohn from Romania deals with a group in their 30s who reunite in their hometown after a decade-long period of separation. The main protagonist leads an apparently happy life in Bucharest while his best childhood friend and his teenage sweetheart have remained trapped in the parochial world of their native village. OUR EVERYDAY LIFE (NAŠA SVAKODNEVNA PRIČA) by Bosnia’s Ines Tanović offers a look on the same generation, but the film’s protagonists are not only examining their life achievements, but are also struggling with the legacy of war. A family falls apart, but they are reunited after the mother, who has kept them together, falls ill. Turkish director Deniz Gamze Ergüven presents her film MUSTANG set in a remote Turkish village on the shores of the Black Sea, as five young sisters are forced to suppress their blooming sensuality. The film deals with demonization of female sexuality and the powerlessness of women. However, the director does not focus on traditional values, but rather on the possibility of rebellion. The film won Europa Cinema Award for the best European film in the Quinzaine des Realisateurs program at Cannes Film Festival.

Serbian film in our selection is Pavle Vučković's debut feature PANAMA that premiered in the Official Selection of the Cannes Film Festival in the Special Screenings. The film examines the questions of sexuality and intimacy as it follows the main protagonist during a carless summer he spends engaging with countless girls until he meets one girl who might be special. Unable to confront his emotions, he distances himself from that girl, but then she disappears. In the second half of the film, set in the fall and winter, the main protagonist furiously searches for something he thinks he lost, but might have never had.

Tunç Davut’s ENTANGLEMENT (DOLANMA) also talks about love. The Turkish director's first feature tells the story of two brothers living in a wooden shed in a forest isolated from the rest of the world. Older brother is in a relationship with a woman who brings a breath of fresh air into their lives, while younger brother falls deeply in love with her. The author skillfully guides his cast as he contrasts the protagonists’ unusual love story with the nature that surrounds them. The first feature film by Hungarian director László Nemes, SON OF SAUL (SAUL FIA) is a powerful story about Holocaust and the hell of Nazi concentration camps as seen through the eyes of the film's main protagonist. The film paints an authentic portrait of Auschwitz in the final days of World War II. Left without any hope of survival, the main protagonist stubbornly wants only one thing: to bury a dead boy who he claims is his son. The film won the Grand Prix at the Cannes Film Festival becoming one of the most important European films produced in 2015.

By offering two world premieres, as well as one international and seven regional, this year’s Competition Program also offers a proof of the supremacy and strength of the regional cinema. The selected films are strong, intelligent, multilayered and brave; the stories they tell are exciting and there is no room for doubt that the audience will recognize their value.