In programming Kinoscope this year, we found ourselves unconsciously veering towards work from young new film-makers. We only realized this when the programme was complete – 12 out of the 19 features are from first- and second-time directors – but perhaps the nature of a festival programmer is to be surprised and delighted by fresh visions and new voices, so in retrospect it’s perhaps not that much of a shock. That’s not to say that we haven’t included some of the world’s most celebrated names. 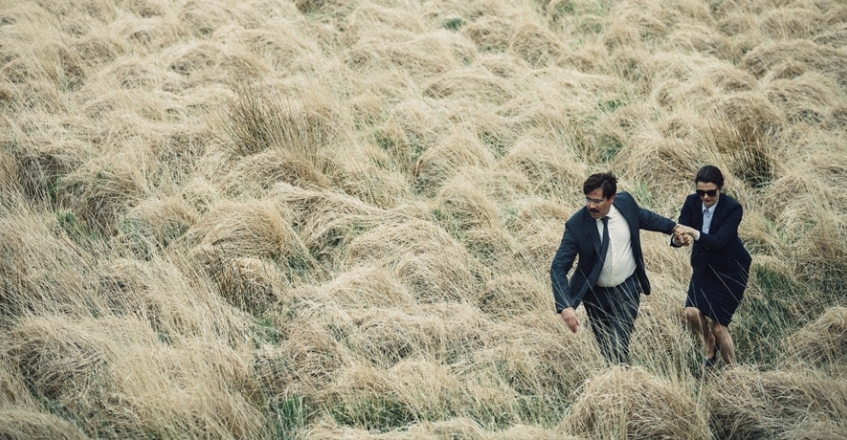 Our opening day films – TAXI and THE LOBSTER – come from the renowned Jafar Panahi and Yorgos Lanthimos respectively and both were event films at this year’s major festivals: TAXI won the Golden Bear at Berlin and THE LOBSTER the jury prize at Cannes. We were also pleased to select titles by Germany’s prolific Christian Petzold (PHOENIX) and Japan’s even more prolific Takashi Miike (YAKUZA APOCALYPSE). But then these film-makers often behave like fresh voices, constantly seeking out exciting new ideas and subverting traditional storytelling techniques.

Throughout the programme, you will see experimentation with form and narrative. How extraordinary that Martti Helde from Estonia shoots his powerful drama IN THE CROSSWIND entirely in tableaux vivants – his actors stationary, his camera exploring each complex set-up – and challenges the viewer to focus on each painful moment of history. And how pleasing that Ciro Guerra from Colombia takes his Amazon exploration epic THE EMBRACE OF THE SERPENT in such unexpected directions that what starts out as a historical adventure story ends as an adventure into existence and metaphysics.

Surprise. That’s the pleasure of programming a section as rich as Kinoscope and one which we bank on the highly cineliterate and curious Sarajevo audience to respond to. No director alive today comes up with storylines as mind-bending as Greece’s Yorgos Lanthimos. In his latest opus THE LOBSTER – which is his first film in English – he and his screenwriting partner Efthymis Filippou have come up with their most oddball concept yet. In characteristic Lanthimos fashion, THE LOBSTER invites you into the rules of its eccentric world and engages you instantly.

Some of our films avoid complexity altogether to no less intriguing effect. Ole Giæver’s OUT OF NATURE, a droll portrait of a man at sea in his suburban Norwegian life, stars Giæver himself as the angst-ridden hero Martin who is the sole character on screen for most of the duration. Paz Fabrega from Costa Rica creates a similarly rich cinematic texture in her intoxicating VIAJE, a two-hander between two young lovers over a few days alone in the countryside. In both cases, nature acts as a place of escape for the characters although they cannot leave their problems behind.

The superb Ariane Labed spends her life escaping a settled existence in Lucie Borleteau’s fascinating FIDELIO, ALICE’S ODYSSEY from France. As an engineer on a freighter, she goes from port to port and lover to lover leaving emotional chaos in her wake.

Ironically many of the film-makers in this year’s selection have chosen to use black-and-white to tell their stories. Five films are shot in black-and-white or a combination of black-and-white and colour. Carlos Quintela’s THE PROJECT OF THE CENTURY – a fascinating glimpse into Cuba’s plans to build a nuclear city - switches between the two. Ana Lily Amirpour’s A GIRL WALKS HOME ALONE AT NIGHT, the much-celebrated Iranian vampire movie (shot in California) uses its highly contrasted b/w cinematography to create a haunting world of shadows as does Avishai Sivan’s bold Israeli drama TIKKUN, albeit to considerably different effect.

Both THE EMBRACE OF THE SERPENT and IN THE CROSSWIND look at historical events and spectacular landscapes through a black-and-white palette, although the former has a colour surprise up its sleeve.

As always in the medium of cinema, catastrophic events in 20th century history are writ large on our programme. In THE CROSSWIND examines the exportation of women and children from the Baltic states to Siberian labour camps in the 1940s. One of our four documentaries THE RUSSIAN WOODPECKER from director Chad Gracia explores the devastation wrought by the Chernobyl nuclear disaster and suggests that a sinister Soviet conspiracy caused it. And PHOENIX, from the increasingly brilliant German director Christian Petzold, is a melodramatic thriller about a woman (played by the ever-excellent Nina Hoss) who returns from Auschwitz to confront the husband who sent her there. The 1951 novel FIRES ON THE PLAIN about the harrowing experiences of Japanese soldiers in the Philippines at the end of World War II gets a new screen treatment from Shinya Tsukamoto. Tsukamoto, the actor and director best known for the frenetic Tetsuo films, brings his trademark chaos to war to chilling effect.

Most contemporary of all is Lydie Wisshaupt-Claudel’s lyrical documentary KILLING TIME which follows a group of US marines on home leave from Afghanistan in 29 Palms in the California desert.

We’re happy to say that two of our documentaries are a lot more playful. B-MOVIE: LUST & SOUND IN WEST BERLIN 1979-1989 is the delirious memoir of an English music promoter Mark Reeder discovering the wildness and music of West Berlin just before the fall of the Wall, while our closing film THE SHOW OF SHOWS sees Iceland’s Benedikt Erlingsson (whose OF HORSES AND MEN was in Kinoscope last year) create a thrilling 70 minute montage of footage from the last century about the world of the circus and the fairground and the entertainers therein.

A GIRL WALKS HOME ALONE AT NIGHT is one of our three midnight movies. The others are Miike’s gloriously batty YAKUZA APOCALYPSE, which speaks for itself, and GREEN ROOM, the brilliant, blood-spattered second feature from US director Jeremy Saulnier (BLUE RUIN). Each film is filled with monsters, humans or otherwise, from zombies and vampires to Japanese gangsters and American neo-Nazis.

Finally, a treat not to be missed is Andrew Haigh’s 45 YEARS which won the actress and actor prizes at the Berlinale this year for Charlotte Rampling and Tom Courtenay. Haigh is one of the UK’s most exciting new directors and 45 Years is a film of enormous sensitivity and emotion that offers a showcase for these two virtuoso actors.

The diversity in Kinoscope this year is reflective of the world cinema we are privileged to view in order to select our programme. We hope that the 19 films we have brought to Sarajevo 2015 will give you a satisfying taste of the celluloid riches produced around the world this year.